What's ahead for South Lake Union? 7,500 housing units and a lot more offices 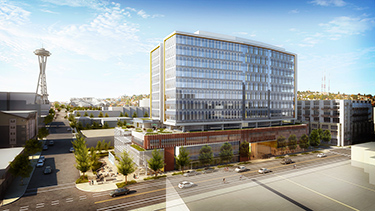 South Lake Union sure doesn't look much like a 100-year-old neighborhood these days.

Some of the old commercial laundries and auto plants that once operated there have been partially preserved in new structures, but technology companies like Amazon.com now rule.

The online retail giant that has helped raise Seattle's national profile fills nearly 2 million square feet in South Lake Union and is still growing. In the same neighborhood, scientists work on medical breakthroughs at Fred Hutchinson Cancer Research Center and biotech companies. And all of this is spawning thousands of new apartments and a bubbling restaurant scene.

Vulcan Real Estate has led South Lake Union's transformation by developing more than 5.2 million square feet of space over about a dozen years. What had been a neighborhood of low-slung industrial buildings is today the global hub for Amazon, a center of bio-medical innovation and one of the hottest housing markets in the country.

For Vulcan, the game is far from over; it's just half-time.

Vulcan is starting to lay out plans for developing the rest of its property in South Lake Union.

But Vulcan won't be the only developer in the neighborhood. South Lake Union's success has attracted local, national and international competition. An analysis of permit records shows developers are planning or building more than 7,500 housing units and 3.9 million square feet of office space.

In the last 10 years, more than $5 billion has been spent on development projects and infrastructure upgrades in the area.

Future South Lake Union projects will be taller and more dense. Until Seattle City Council passed a rezone for the neighborhood last year, most parcels had maximum heights of 65 to 85 feet. Now structures as high as 400 feet are allowed along Denny Way, and 160- to 240-foot buildings could dot the skyline in the future.

Vulcan and other developers are taking advantage of the new height and density rules to plan towers that previously could only be built downtown.

Vulcan will be responsible for most of the office projects planned so far. It has more than 1.3 million square feet under construction and another 388,000 square feet in design review. Those include four more buildings for Amazon and the Allen Institute for Brain Science.

(Editor's note: The story has been changed to correct the number of new buildings for Amazon from six to four.)

Vulcan is still in the early stages of planning the next wave of office and apartment projects.

Near Denny Park, Vulcan is eyeing a 400-foot residential tower with approximately 500 units, and a 240-foot office tower with 420,000 square feet.

Another office tower on Westlake and an apartment building on Eighth Avenue that could be 240 feet tall appear to be part of Vulcan's future South Lake Union plans as well.

Lori Mason Curran, Vulcan's real estate investment strategy director, said these projects are a ways off. Vulcan does not intend to start construction on any of them this year. The plan is to get permits, and then wait until the market is ready.

Mason Curran said Vulcan would build more office space if there were tenants, but a lot of new space has opened in the neighborhood and apartments are just starting to catch up.

“We are seeing a huge influx of workers not just in South Lake Union, but Seattle in general,” Mason Curran said. “With such a strong economy, we see a need for more housing.”

With an office vacancy rate under 5 percent, office developers like South Lake Union. In addition to Vulcan's projects, three other office complexes are under construction there: Skanska USA's 13-story 400 Fairview, Capstone Development's 10-story Dexter Station, and the first phase of Touchstone Corp.'s two-building complex on the former Troy Laundry site. They total about 1.1 million square feet.

Several other office projects are in various stages of planning, but all this pales in comparison to what's happening with apartments: more than 7,500 units are planned.

“The job growth really led the neighborhood, and I think there will continue to be demand for more housing in proximity to those jobs,” said Greg Van Patten of The Wolff Co., a Scottsdale, Arizona-based developer. In June, Wolff will start an eight-story, 211-unit apartment building at 430 Eighth Ave. N. that should open near the end of 2015.

Van Patten said Wolff got interested in South Lake Union in 2012. He compared it to Portland's Pearl District and said developers here could learn a few things from that neighborhood.

The Portland Design Commission made sure developers in the Pearl focused on the street level by finding local retailers and setting buildings back from the sidewalk to make room for little parks and gathering spaces. In its South Lake Union project, Wolff will have a large courtyard along Eighth Avenue and much of the retail will be filled by Glazer's Camera, which has a store on the site now.

Van Patten said as land in South Lake Union has gotten harder to find, development gets pushed south into the Denny Triangle. Many developers are pitching projects in the blocks south of Denny.

Holland Partner Group of Vancouver built its first apartment complex in the area in 2001. The company didn't choose the location because of proximity to South Lake Union but to Queen Anne.

Tom Parsons, president of Holland's development arm, said the area along Dexter was a disorganized retail corridor in the early 2000s.

As Amazon became a force in the neighborhood, Holland quickly planned several apartment complexes. Between the start of 2013 and May of this year, Holland will finish 801 apartments. Holland is also planning a 361-unit project at 810 Dexter Ave. N.

“We laid the bet large that this is going to be a highly desirable place for people to live,” Parsons said.

The office building is likely the first new structure. As part of the land purchase, Holland got a master use permit. Holland also has started the permit process for two apartment buildings.

Parsons called the site a critical piece of South Lake Union that has been empty too long. He said developers can get a premium for apartment rents because tech workers can walk to the office. 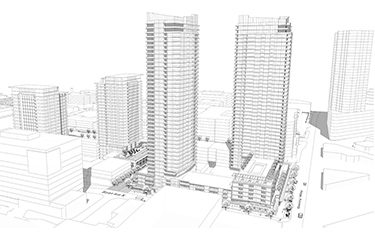 But the highest profile project in the area might be Vancouver, B.C.-based Onni Group's four towers on two blocks it bought from The Seattle Times. Plans call for four towers on the site bounded by Thomas Street, Denny Way, Boren and Fairview. The Denny/Fairview block will have two 40-story towers with 1,085 units, and the northern block along Thomas will have two 24-story towers with 865 units.

The towers will sit on a retail podium with 44,000 square feet, and there will be approximately 1,900 underground parking spaces. The project represents nearly one-third of all housing units planned in the neighborhood.

Onni representatives did not return phone calls requesting comment, but have said they want to start construction as soon as they get permits.

For Vulcan, Onni's project is competition, but it's friendly competition. The neighborhood is nowhere near close to being overbuilt on the apartment side, Mason Curran said.

“Developers coming in is validation that we have a vision for the neighborhood that is very compelling,” Mason Curran said. “You might have less control, but we've never owned the whole neighborhood. I think there's this great opportunity for all players in the neighborhood to get together and work on that neighborhood brand we have worked on for the last 10 years.”

This development boom may not have happened if it weren't for a complex series of events that put much of South Lake Union's land in Vulcan's hands.

A century ago, South Lake Union was booming, but in a different way. In 1890, the Seattle Electric Railway and Power Co. built a streetcar line in just five days from downtown to Lake Union, along what would later become Westlake Avenue, according to an essay at historylink.org.

But in 1941, the streetcar was eliminated, and later construction of Interstate 5 separated South Lake Union from Capitol Hill.

In the 1990s a Seattle Times columnist, John Hinterberger, first put forward the idea of a Central Park-like place called Seattle Commons. A property tax levy would have led to construction of a park from downtown to Lake Union. But voters twice rejected the plan and Paul Allen, who had lent $20 million to a group to buy land for the park, became the owner of more than 10.6 acres.

When Fred Hutchinson decided to move its headquarters there in the early 1990s, biotech firms followed. In 2007, Amazon announced it would move its offices to South Lake Union.

But Vulcan had Amazon, so it pushed forward with building during the recession. Vulcan eventually finished Amazon's 11-building campus, which it sold to the online retail giant in 2012 for $1.15 billion.

“Looking back at the recession, it was dark time,” Mason Curran said, “but during the recession we had cranes up, and we were developing. And (South Lake Union) was one of the only places in the country where that much development was happening.”

The place to be

As the neighborhood's renaissance began, it was all office workers. Then restaurants and housing followed. South Lake Union is bustling after work as people head for dinner and happy hour at its popular restaurants.

But after dinner, the neighborhood begins to slow down. It doesn't have the 24-hour activity that other vibrant neighborhoods boast.

Maria Royer, principal at Real Retail, has represented Amazon in the search for retailers for its buildings. She said a combination of neighborhood retail that fills day-to-day needs and entertainment like a movie theater or bowling alley are needed.

“The biggest trigger that is going to bring change is all the new residential uses,” Royer said. “It's really going to create this 18-hour district, extending restaurants where they will get more than one or two turns per night.”

Mason Curran said Vulcan has emphasized local retail in its projects. She said she hopes that as other developers start projects there, they look for retail that fits the neighborhood.

Parsons said he anticipates that South Lake Union will grow up a bit in the coming years. Some of the young tech workers who call the neighborhood home now may opt to stay when they have children, eschewing the traditional exit to the suburbs.

Parsons said Holland is starting to add bigger units to its new projects on Dexter. There are already a few young kids in some of Holland's new buildings.

“At the end of the day it is going to come back to, ‘how long can I live and work in an apartment in this kind of neighborhood before I have to buy,' which can set up a 30- to 60-minute commute,” Parsons said. “I don't think that personality really wants that. They want to simplify life; they work long hours.”