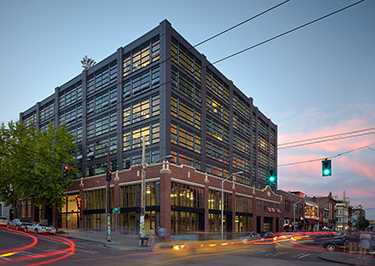 Photos by Doug Scott [enlarge]
An 88-year-old brick facade was preserved for the construction of the Sunset Electric apartments on Capitol Hill.

The seven-story project includes a 5,800-square-foot retail space on 11th Avenue that will house a beer-centric restaurant called Stout, and parking for 33 vehicles beneath the building.

The Wolff Co. bought the project from Pryde+Johnson for $6.7 million in 2012.

Sunset Electric was one of the first projects to participate in the city's Pike-Pine character structure overlay program, which allows higher building heights in exchange for preserving character facades of buildings more than 75 years old.

Original framing timbers were reclaimed to create kitchen shelving, hallway coat racks and bedroom “barn doors” in the units, as well as stair treads in the live-work units and common areas. 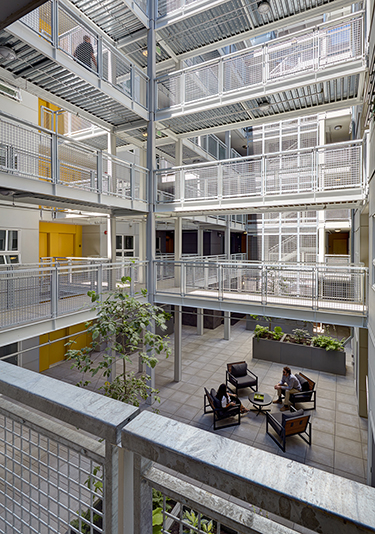 [enlarge]
The seven-story building is organized around an interior courtyard.

Sunset Electric also has numerous of green features, and is expected to receive LEED platinum, according to the architect.

(Editor's note: This story has been changed to correct the information on the project's goals for green certification.)

The building is organized around an open-air interior courtyard designed to let units receive lots of natural light and allow for passive cooling. Without interior hallways, the building has no need for mechanically conditioned corridors and common areas.

The building also uses a reverse-cycle chiller, which is a water-heating system that works the garage exhaust ventilation by transferring latent heat from the air in the garage to the domestic hot-water supply.

All the units have low-flow water fixtures and high-efficiency appliances and lighting packages. An exterior stairwell encourages residents to take the stairs.

The building is expected to use 43 percent less energy than an average U.S. apartment building.

Riverstone Residential Group is the property manager and JSH Properties is the retail broker.

The Wolff Co. has several other projects underway in Seattle, including the 260-unit Pike Motorworks mixed-use building at 714 E. Pike St. on Capitol Hill, a 211-unit apartment and retail project at 430 Eighth Ave. N. in South Lake Union, a 244-unit apartment complex at 4730 32nd Ave. S. in Columbia City, and an 88-unit apartment building at 4730 California Ave. S.W. in West Seattle.

Wolff is a private equity firm based in Scottsdale, Arizona, that buys and builds apartments.