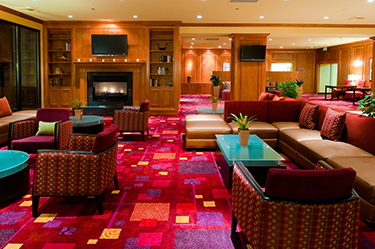 Photo courtesy of Red Lion Hotels [enlarge]
Online reviewers say the hotel lobby is great, but the new owners will renovate the 224 rooms and HVAC system.

Onkaar Dhaliwal says back in the old days the body of a Cessna airplane sat on the roof of the hotel he now owns at the end of SR 167 in Renton, signaling that you had arrived in Boeing country.

Dhaliwal said the plane was removed in 1987 and the hotel at 1 S. Grady Way began its decline.

Reviews on Yelp over the past few years described the former Holiday Inn as “shabby,” “gross” and “worse than the worst hotel I stayed in when I was in Belgrade.”

Dhaliwal and two business partners took over the hotel last month after buying it for $9 million on Auction.com, a website that connects real estate buyers and sellers. He said his group buys underperforming assets and renovates them.

“We're excited about this hotel and property,” he said. “We know the city and the community. We will do every effort to bring (the hotel) back to its heyday.”

Dhaliwal grew up in Kent, graduated from the University of Washington and worked at Boeing for five years as a senior financial analyst. About 10 years ago, he got into the hospitality business with Pintu Bath of Olympia. For the Renton project, the two have added another partner: Avtar Dhillon of Sacramento, California.

The men have invested — both individually and as a group — in about two dozen hotels in several western states.

Dhaliwal's group already has made a few cosmetic upgrades to the Renton hotel, but he said it needs more and he is asking the community to be patient while they rework the property.

The group will spend $3 million on a makeover, starting with a few floors this winter when business slows down. Rooms will get upgrades, and they will put in new windows, improve HVAC and paint the exterior.

Dhaliwal said they plan to hire an architect and general contractor.

Dhaliwal said his group picked Red Lion because the name is well known and the company is based in Spokane. He said they were approached by Holiday Inn, La Quinta Inns & Suites, Best Western International and Wyndham Hotel Group.

The 224-room hotel operated as a Holiday Inn for many of its 48 years, but within the last year it became an independent called Rainier Hotel and Conference Center. Dhaliwal said a bank bought the hotel in March 2012 and hired a property manager to run it.

Dhaliwal's group tracked the property for three years and tried to buy it twice during that time. Dhaliwal said they got a good deal at the auction.

The hotel has an outdoor pool, fitness center, 7,000 square feet of meeting space and The Yankee Grill restaurant. It has a park-and-fly lot and a free shuttle to Sea-Tac Airport, which is 6 miles away. Westfield Southcenter and The Landing shopping centers are close, as well as Starfire soccer complex, Seahawks training facility and several Boeing facilities.

Dhaliwal is hoping he can put an airplane back on the roof, and said he'll buy a Cessna body.