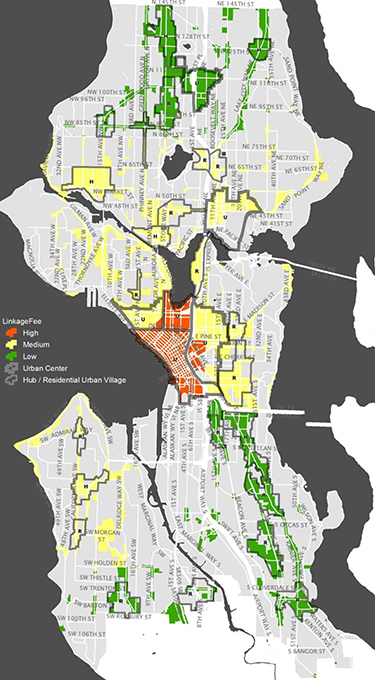 (Editor's note: The caption for the map was changed to correct the colors used.)

A Seattle City Council committee is moving forward with plans to add fees to new development projects in most parts of the city to support the construction of affordable housing.

The Planning, Land Use and Sustainability Committee Tuesday approved a resolution for what are called linkage fees. The full council is expected vote on the resolution Monday.

A resolution is not a final vote, but it is an indication that the council supports the new fee. City staff will offer an ordinance for public review next May, and it will go before the council in June.

The city wants to start charging the fees in October 2015. They will start out lower and rise over a two-year period. The full fee would take effect on Oct. 1, 2017.

The city says the funding will help offset the impact of rising rents on middle and lower-income people.

“If we want Seattle to be an inclusive city for people of all incomes, then we need to see more housing produced that's affordable to more people,” said Councilmember Mike O'Brien, chair of the land use committee. “Up until this point, the market has clearly not given us the housing we need.”

Some developers are opposing the program as a tax on new development.

Here's how the fees would work:

For new projects in most commercial and multifamily zones, developers would pay a dollar amount per square foot, which varies depending on the location. The policy would not affect existing projects or those with permit applications submitted prior to when the fee starts.

The city is considering three tiers for the fee, based on location:

• In the highest cost neighborhoods — like South Lake Union, downtown and First Hill — developers would pay between $16 and $22 per square foot.

• In popular neighborhoods outside of downtown — like Ballard, Capitol Hill, Fremont, parts of Queen Anne, West Seattle and the University District — developers would pay between $10 and $12 per square foot.

• A third level applies in northern and southern neighborhoods like Rainier Valley, Northgate, Lake City and along Aurora Avenue North. Developers with projects in these areas would pay $5 to $7 per square foot.

The council will set the final fees in the ordinance.

Developers could avoid the fees by making 3 to 5 percent of the units in their buildings affordable to people making less than 80 percent of area median income.

The idea for linkage fees surfaced earlier this year as part of a broader discussion about affordable housing. An Oakland-based consultant called Cornerstone Partnership suggested the fee as a way to increase developers' contributions to affordable housing.

The fee has gotten push-back from developers, development advocates and land use attorneys, among others.

Kevin Wallace's firm Wallace Properties has done several projects using the city's Multifamily Property Tax Exemption program, which gives developers a break on property taxes in exchange for keeping 20 percent of the units affordable for people making 65 to 85 percent of area median income. Wallace, who is also a member of Bellevue City Council, said property tax exemptions give developers an incentive to build affordable housing, but the linkage fee offers no benefits to developers.

“Development will have to stop in its tracks until rents of any kind increase enough to offset that cost,” Wallace said.

A group of Seattle land use attorneys including Chuck Wolfe, Melody McCutcheon and Don Marcy recently sent a letter to the council saying the fee violates a state law that bars cities from imposing “taxes, fees, charges, either direct or indirect, on housing development.”

There are a few exceptions to the law, such as a voluntary fee, incentives, or applying the fees toward an accepted list of “public facilities,” but that does not include affordable housing, the attorneys said. The letter said none of these exceptions apply to linkage fees.

“There is no legally supportable justification for imposing this tax on those who seek to develop the housing, office and commercial space necessary for our city to grow and thrive,” they wrote. “We strongly urge the council not to adopt the proposed development tax resolution as (this) significant policy shift deserves a much closer and more deliberative review.”