2nd & Virginia tower will start as condos, but could be apartments 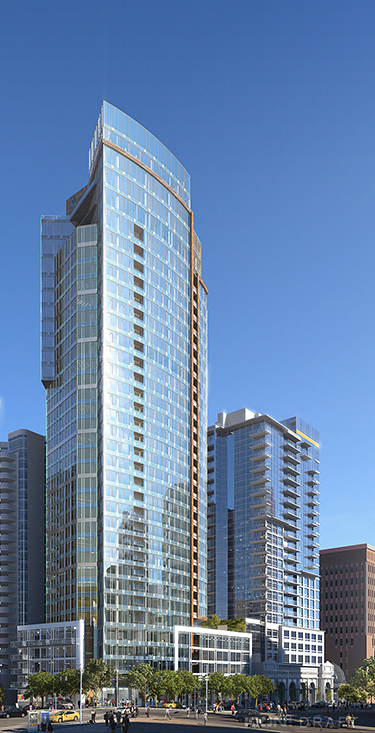 Continental Properties will start construction early next year on a 34-story tower at Second Avenue and Virginia Street in downtown Seattle that will be built as condos.

But the units could be switched to apartments during construction if the rental market remains strong.

“They're both good options and we're going to wait and read the market — both the condominium market and the rental market — in a year from now instead of making the decision now,” he said.

This unusual move is the result of downtown Seattle's unusually strong apartment market. Building after building is filling up, and rents are rising.

Guincher said that over the last 25 years, developers typically have made more money on condos than apartments. But demand now for renting and selling Seattle apartment buildings is so strong that developers can make almost as much with apartments as with condos — with potentially less risk, he said.

Continental's tower will have 314 units, and is expected to open in early 2017. It was designed by Weber Thompson and will be built by PCL Construction Services.

It will have a rooftop deck with barbecues, fire-pits and views of Elliott Bay. A gym with sauna and hot tub, as well as a lounge and library will also be on the top floor.

Parking will total 325 stalls, with half above and half below ground.

HSBC Bank is providing construction financing. Guincher declined to name his equity partners in the project and to provide the project cost.

Dupre + Scott Apartment Advisors said the average rent for downtown Seattle/Belltown/South Lake Union is $1,906. That's up 9.5 percent from a year ago. Part of that increase is due to the opening of new properties, which typically rent for more. Excluding the new units, rents rose 7.9 percent.

Dupre + Scott said it expects rents will keep rising but at a significantly slower rate, and vacancies will climb between now and the end of 2015 because developers will open another 2,260 market-rate units in that time.

Guincher said a switch to apartments on the Second and Virginia project would just require minor tweaks to appliances and finishings.

Bellevue-based Continental has built a number of condo and apartment projects in and around downtown Seattle. Continental and an affiliate of Deutsche Bank developed The Cosmopolitan, a 34-story, 250-unit condo building downtown. When those units went on the market in 2005, buyers signed 204 purchase-and-sale agreements on the first weekend.

Continental built a number of other condo projects here in that boom from 2005 to 2007, but got out before that market crashed.

The company is now working on two apartment projects in Seattle, and recently sold two others. It's also developing the 117-unit VIK Condominiums in Ballard.

Guincher said downtown Seattle's condo market is “emerging and recovering,” but so far most people are opting to rent. Younger people hired by tech firms such as Amazon want the flexibility and mobility of renting, he said.

However, he said, there's still a segment of people who want condos. Guincher said some developers have shied away from condos because of the potential for construction claims and because it's difficult to get construction financing.

But even given the risk, he said, condos can be profitable.

The Mark Co., a San Francisco-based marketing and sales firm, recently said there are about 181 never-sold units available in downtown Seattle.

The sale prices for new condos downtown rose 2 percent in September over the previous month, The Mark Co. said. However, sale prices are down 8 percent from this year's peak in May, when new 10th floor, 1,000-square-foot condos went for an average of $775 per square foot.

If Continental decides to stick with condos downtown, it will have some competition — but not much.

Burnaby, B.C.-based Bosa Development is building two 41-story condo towers, with a total of 707 units. The project, called Insignia, is on Sixth Avenue between Battery and Bell streets. The developer said yesterday that almost 200 of the condos have sold.

Another developer recently jumped into the condo market downtown. The North American affiliate of a Chinese company called TeamRise bought a site this month in Belltown near Insignia. TeamRise plans two condo buildings at 2302-2316 Fourth Ave.: one 24 or 25 stories and one six- to eight stories.

Lowe Enterprises Investors is due to break ground this fall on a 169-unit condo tower on First Hill called Luma. And RBF Property Group, based in Guangzhou, China, plans a 42-story tower at 1121 Stewart St. that will have a 78-room hotel topped by 95 condos.

Guincher said Continental's project at the northwest corner of Second and Virginia can be brought to market quicker than other projects in the pipeline downtown because the site it bought in March came with a master-use permit.

He said the site is in a prime location near Pike Place Market, the downtown retail core and entertainment, and within walking distance of Amazon's future headquarters.