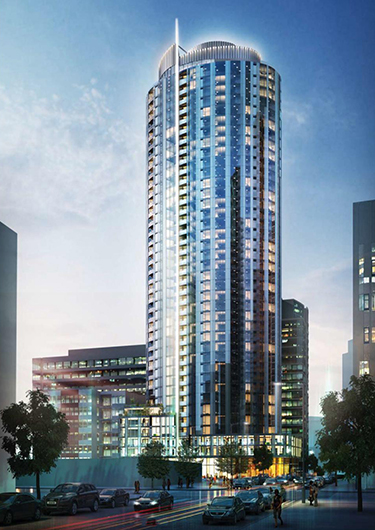 The images show an oval-shaped tower set on on a four-story podium. Project documents filed with the city said the “continous oval shape” will make the building stand out from other high rises planned in the Denny Triangle.

Retail space will be on the ground floor, and there will be underground parking for 389 vehicles and 231 bicycles.

Graphite Design Group is the architect.

A design review recommendation meeting is set for 5:30 p.m. Nov. 4 in City Hall.

Clise also filed plans with the city for an 11-story data center at 2229 Sixth Ave., on a parking lot next to Blanchard Plaza.

Graphite Design Group also is the architect for that project.

Decades later that bet paid off for Clise. Since 2012, Clise has sold four blocks in the Denny Triangle to Amazon.com for nearly $260 million.