63 apartments may come bobbin' along 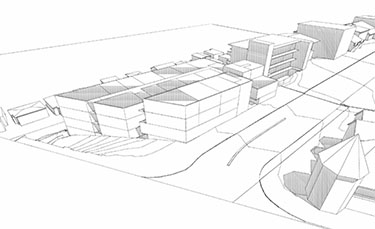 Image by b9 Architects [enlarge]
The complex on Fuhrman Avenue would be on the site of the original Red Robin restaurant.

The spot where the original Red Robin restaurant once stood could soon house an apartment complex.

Developers Michael Heijer and Robert Hardy want to put a two-building complex at 3272 Fuhrman Ave. E., at the south end of the University Bridge in Eastlake.

Heijer of GranCorp Holdings is working with Hardy in a joint venture.

The complex would have 63 apartments, 1,800 square feet of ground-level retail and underground parking for 15 vehicles. It would step down the steep slope with a three-story building on Fuhrman and a four-story building north of that. There may be a courtyard in between.

The building on Fuhrman would house the retail and the second building would have most of the apartments. Both structures would have access to Fuhrman.

The designer is b9 Architects.

Red Robin Gourmet Burgers closed its Eastlake restaurant in 2010. The building was originally constructed in 1916, according to public records, and became Sam's Tavern in the 1940s. The owner was said to love the song “When the Red, Red Robin (Comes Bob, Bob, Bobbin' Along)” and changed the tavern's name to Sam's Red Robin.

In 1969, a new owner turned the tavern into a restaurant and dropped “Sam's” from the name.

The Colorado-based burger chain said when it closed the restaurant that the 1,200-square-foot structure needed “considerable investment to maintain the building” and make it more efficient and comfortable.

Heijer and Hardy acquired the site in 2014 for $2.8 million after plans fell through to renovate the building for a Pecos Pit Barbeque restaurant. The structure was demolished over the summer.

Heijer said retail in the new complex could fit a restaurant or coffee shop.

The developers hope to break ground in early 2016 and finish by the spring of 2017.

Heijer said they're talking to a couple of general contractors but have not selected one.

A Seattle design review board will hold an early design guidance meeting at 8 p.m. Feb. 25 in the Case Commons Building, Room 500E, at Seattle University.

Robert Hardy told the DJC in 2014 that he has flipped or built more than 700 houses and condos, redeveloped retail centers and built apartment complexes.