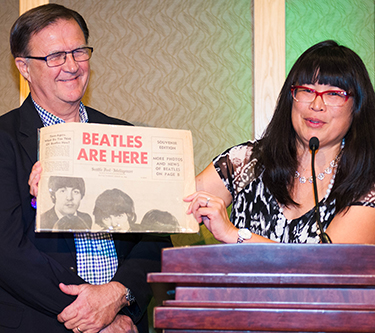 Photos courtesy of LIHI [enlarge]
Sharon Lee gave Tom Mathews, a Beatles fan, this copy of the Seattle P-I from 1964 about the Fab Four’s visit to Seattle.

Sharon Lee and Tom Mathews have known each other for about two decades, and that relationship has helped each of their businesses grow.

“It's been a long, productive and enjoyable time working with Sharon and LIHI,” Mathews said.

When Mathews joined Walsh in 1992, the Seattle office had no projects under construction and only one bid submitted. Mathews slowly and methodically went about finding new projects and clients. Nonprofit housing played a big role.

“It's good, honest work and we get to work with a lot of good organizations,” he said. Some of those groups are YWCA, Compass Housing, Mercy Housing and the Sisters of Providence.

LIHI has evolved over the years to develop larger and more complex projects, and Lee said Mathews has helped with that evolution.

“The stereotype of low-income housing (is) ugly public housing that nobody wants to live in. He transformed it into attractive housing and an asset to the community,” Lee said. 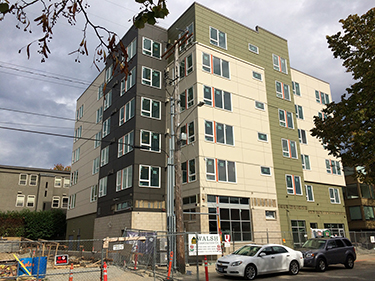 “Nobody recognizes it as affordable housing,” she said. “It gives dignity and respect to families.”

Lee said she likes that Walsh Construction does post-occupancy reviews after construction and will go back to fix any problems.

“We struggle with (other) contractors that are non-responsive after they do a project with us,” Lee said.

“If you call in 10 years with a problem, we will send a team in to investigate and help formulate a solution,” he said.

That approach has led to a lot of repeat business. Walsh is starting a 68-unit workforce housing project at 20th and Jackson for LIHI, next to LIHI's 60-unit Ernestine Anderson Place that Walsh built two years ago.

Mathews said working with nonprofits was already part of Walsh's approach when he joined the Portland-based firm after a 10-year stint as a project manager at Wright Runstad & Co. He said he was involved with some big projects at Wright Runstad — early Microsoft buildings, Washington Mutual Tower and Wells Fargo Center — but wanted a career change.

Mathews said affordable housing made up around 75 percent of Walsh's business in the past, but now it's about 50 percent. He said the firm has picked up more college housing projects, as well as senior housing with both for-profit and nonprofit developers.

Tenants are moving in soon at the latest LIHI/Walsh project: Cheryl Chow Court in Ballard. Lee said the 50-unit project will set aside some units for seniors who were previously homeless.

Last year Lee presented Mathews with the LIHI housing award, along with a 1964 souvenir edition of the Seattle Post-Intelligencer covering the Beatles' arrival in Seattle.

Mathews said he and his wife, Leslie, traveled to England a few years ago to trace the path the Beatles took in their early years. He said it was a great way to tour England while learning a lot of history.

Mathews is no longer involved in daily operations at Walsh, but remains on the boards of the company and Walsh Charitable Foundation. He said he looks forward to continuing his support of nonprofits like LIHI.