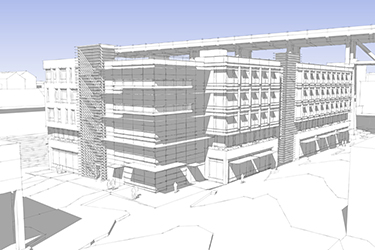 Courtesy Weber Thompson [enlarge]
The site is at 744 N. 34th St., across from Tableau’s headquarters.

Construction could begin early next year in Fremont on a five-story, tech-oriented office building.

They worked together on 202 Westlake, an office building in South Lake Union that started construction without signing any tenants but later managed to snag Amazon.com. That building sold in 2013 for what was then a record: $745 a square foot. They also turned Sound Mind & Body's former gym in Fremont into offices for Tableau Software.

The group's latest project is at 744 N. 34th St., across the street from Tableau's Fremont headquarters. It will have 108,777 square feet of office space and 15,549 square feet of retail, with underground parking for 258 vehicles and 60 bikes.

If construction begins in early 2016, the building should open by spring 2017.

Hess said he and his partners could start construction without a tenant, but two or three companies in Fremont are “bursting at the seams” and the group hopes to land one of them.

The project just had its first design review meeting, so plans are evolving.

Grey said they are taking some ideas from The Terry Thomas, a structure in South Lake Union he and Hess worked on that is now home to Weber Thompson. The 40,000-square-foot building won numerous awards for sustainable elements such as operable windows, automated louvers and a courtyard that helps draw fresh air into work spaces.

Weber Thompson is designing the Fremont building, and Pennon Construction is the general contractor.

The plan now is to shoot for at least LEED silver certification, with a partially green roof and a biofiltration system to filter stormwater.

A central courtyard will bring daylight into the building, and solar shades will keep out some of the heat, but Grey said plans are still forming.

The project team wants a pedestrian connection between the building and A.B. Ernst Park and the Fremont library north of the site.

They are also looking at adding biofiltration swales along Troll Avenue North to filter runoff from the Aurora Bridge before it is released into the Ship Canal.

“We want to do our little part in cleaning up some of that water,” Hess said.