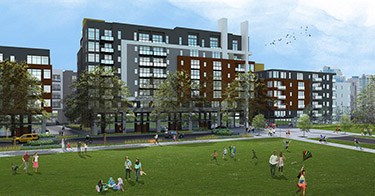 Image courtesy of GGLO [enlarge]
This nine-story apartment building is the largest one Security Properties will build in the Spring District.

Security Properties is on track to start construction of the first housing project in the 36-acre Spring District in Bellevue within a month.

The five buildings Security Properties is planning will range from three to nine stories and have a total of 305 units.

Michael Nanney of Security Properties said they will be built in phases and open one at a time, over about two years.

The developer is calling the five-building complex “sparc” because it will be the spark that sets off the Spring District. Sparc is also the name of an early microprocessor made by Sun Microsystems in the 1980s.

The team is the same for all five buildings. GGLO is the architect, and Walsh Construction Co. is the general contractor. Other members are Triad Associates, Bumgardner and Cary Kopczynski & Co.

Security Properties could double down on the Spring District. It has an option to buy an 84,000-square-foot parcel east of sparc, and Security Properties estimates it could build up to 250 units on that site. The developer will set up a pre-application meeting with the city of Bellevue in a few weeks to begin planning that project.

Sparc will have 13,000 square feet of retail in one building. The space has been leased, but Security Properties did not name the tenant.

The sparc site is on the southwest corner of the Spring District, about 35 feet above the intersection of 120th Avenue Northeast and Northeast 12th Street. That elevation means every unit will have views of downtown Bellevue and Mount Rainier.

Nanney said at one of the first project meetings with the city in Bellevue City Hall, the team spotted the Safeway distribution center, which used to be on the site. Nanney said that was an “epiphany moment” when the team realized all the apartments would have great views.

Apartments will be built on only about half of Security Properties' site. The rest will be open space, and construction is underway on a two-acre park in the district.

“It's going to be very inviting to come out of your unit and spend time on the site itself and meet people,” Nanney said.

There will also be a gym, rooftop lounge with a demonstration kitchen, resident WiFi cafe, and a bike club and repair center.

Marasco has been tracking the Spring District for some time. He said he worked on an Urban Land Institute task force focused on the Bel-Red area, before zoning in the neighborhood was finalized.

Marasco said the neighborhood plan and the chance to work with Wright Runstad and Shorenstein Properties was what interested his firm.

“I liked it because it was a neighborhood being master planned very close to (downtown), that was going to include access to the light rail system, and that access is very limited on the Eastside.”

The $2.3 billion Spring District could have up to 5.3 million square feet of offices, retail, housing and parks.