Another hotel deal for Provenance 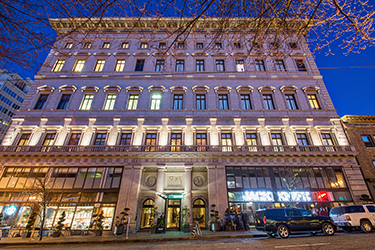 Provenance Hotels said it acquired a partner's 50 percent stake in The Sentinel in Portland, giving the Portland-based company full ownership.

The two firms teamed up to buy the former Governor Hotel in 2012. They renovated the six-story, 100-room hotel and re-named it The Sentinel.

WATG of Los Angeles designed the renovation, and Turner Construction Co. was the general contractor.

Provenance and Woodbine are working together on another hotel: Old No. 77 Hotel & Chandlery in New Orleans, which is set to open in April.

Provenance has made three big purchases in 2015. The company bought its partner's interest in Seattle's Roosevelt Hotel for $37 million, teaming up with NBP Capital on that transaction. Provenance and NBP also bought the historic Woodlark and Cornelius buildings in Portland to turn them into a hotel.

In Seattle, Provenance owns and operates Hotel 1000 and Hotel Max, and it has Hotel Murano in Tacoma. It also owns Seattle's Paramount Hotel.

In an interview with the DJC earlier this month, Provenance's Bashar Wali said the company is working on another project in Seattle, but he did not give details.