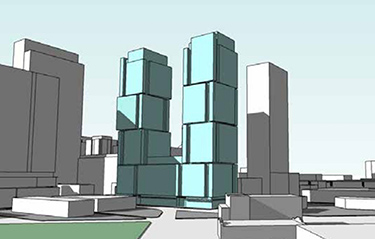 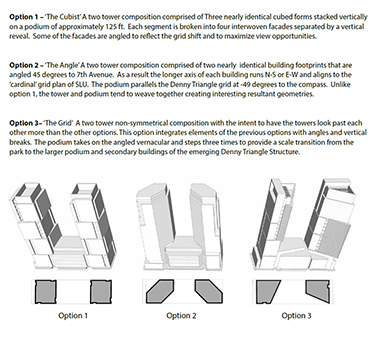 [enlarge]
Here is a look at all three options. (Click to enlarge)

A meeting tonight will look at Clise Properties' proposal for two 40-story residential towers and about 180,000 square feet of office space at 2301 Seventh Ave. in Seattle.

Graphite Design Group is the architect, and the site is on Seventh Avenue between Battery and Bell streets in the Denny Triangle.

The property is across an alley from Antioch University and near the blocks where Amazon.com is constructing more than 3 million square feet of office space.

Clise is seeking a master use permit for the project, which would have two towers on a 10-story podium. The podium would include townhouse units, five levels of office space and parking for residents.

The podium would have a terrace, and there would be a “sky garden” on the upper floors of both towers. Office levels would have private amenities.

Clise is considering three options for the towers. Here they are:

• The Grid, a non-symmetrical composition designed so the towers would “look past each other”

Elements on the base would use shapes and materials common to newer designs in the neighborhood, the proposal says. Sidewalks would have weather protection, and there would be plantings and street furniture.

The proposal notes that with retail, office and housing, there would be “eyes on the street” at all hours.

On the site today is parking, a transmission shop and a car rental “hut.”