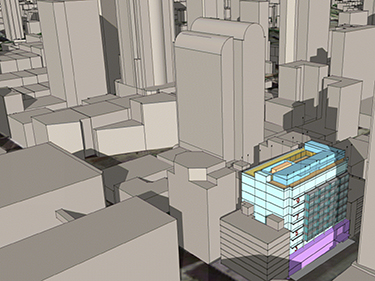 Courtesy CollinsWoerman [enlarge]
This is an early look at plans for an 11-story office building at 1516 Second Ave. 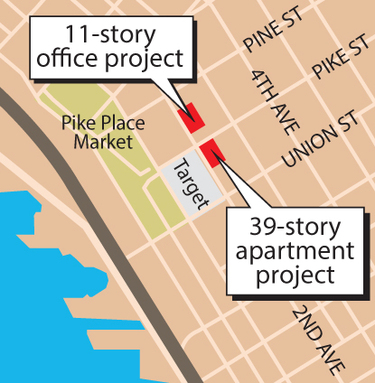 A number of hotels, apartments and office projects are planned along the corridor, and Greg Smith's Urban Visions is at the heart of it.

Smith has spent a dozen years collecting land around Second and Pike, in an area he calls the “missing link” in downtown.

Now he is ready to make his move and start construction in July on a 39-story apartment complex on the southeast corner of the intersection. He also recently filed plans for an 11-story office building at 1516 Second Ave., where the Chromer Building stands today.

“That location is the ‘great room' of the city of Seattle, starting with Pike Place Market,” Smith said. “It is the center of the bullseye connecting Capitol Hill to the waterfront and Seattle Center down to Pioneer Square. It's really, truly the crossroads of the city.”

Though plans for the 11-story building still are preliminary, it could have eight levels of office space, two levels of retail and a residence or two on the top floor.

The 160-foot structure would have 15-foot floor-to-floor heights and floorplates of about 17,000 square feet. Every office floor will have outdoor decks for meetings or other gatherings.

Urban Visions is working with CollinsWoerman on the design.

Smith said he wants a “boutique” building. There are other office projects under construction downtown and more planned, but Smith said his will be different.

All the others are much larger, and no one else is planning office space along Pike and Pine, where Smith said there's a different energy and almost no vacant space.

If the Seattle economy stays strong, Smith said he'd like to start construction on the 11-story building by the middle of next year, possibly without any preleasing. His preference would be to get some preleasing, like he did at 200 Occidental, which will be the future headquarters for Weyerhaeuser.

Smith said he has considered going taller on the Second Avenue site — up to 400 feet — and won't rule that out, but he said there isn't anything like what he is planning nearby. The building could be headquarters for a growing tech firm or house a more traditional business looking for an upgrade. 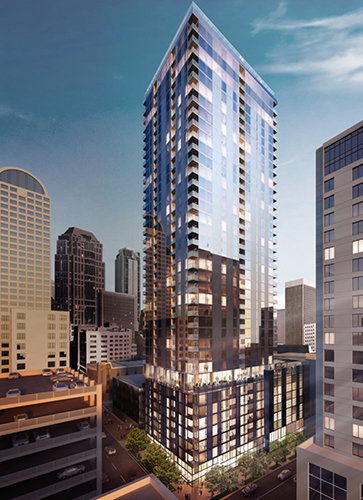 Smith said 10 million people a year walk by Second and Pike, making his site a prime spot for retail. Usually second-floor retail doesn't do well, but Target, Wild Ginger, TJ Maxx and Hard Rock Cafe (in another building Smith owns) have been successful with multi-level retail along Second. Smith sees the two-level retail space he is planning as a continuation of that trend.

Urban Visions bought the Chromer Building and an adjacent parking lot in 2013 for $11.75 million.

Smith recently landed the Japanese company Mitsui Fudosan America as his partner for the Second and Pike apartment tower. That project is expected to open in fall 2017.

Pike Place Market is the main amenity, Smith said, but that doesn't mean his building will be without its own attractions. The gym and meeting rooms will have great views from the top floor, and the units will average 928 square feet, which he said is much larger than most new buildings. There will be a space that “celebrates your pet” and a play area for small children.

“You've got the best of the best in that neighborhood, and it's because they adjoin the Pike Place Market and the proximity to the waterfront,” Smith said.

The eighth floor will have a bar and restaurant with views of the market.

Smith said he wants to have some glass cubes that extend out from the building. People will be able to stand in the cubes and look up at the apartment building or down to the street.