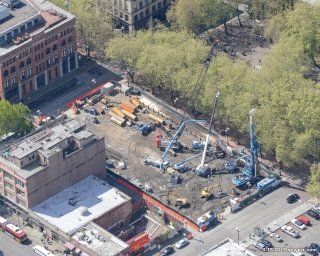 Developers are snapping up properties near the doomed Alaskan Way Viaduct, and that means work for companies that will build offices, apartments and other projects on those sites.

John Kvinsland of Malcolm Drilling said his company has won five projects and is going after another, all on sites that are within a few blocks of the viaduct.

Kvinsland, vice president and project manager at Malcolm, said the impending removal of the viaduct is “amounting to a lot of work for us and many others.”

Here are the five projects Malcolm has going:

• At Western Avenue and University Street, adjacent to the viaduct, Malcolm soon will start shoring and shaft drilling for a 16-story apartment building by Mack Urban. Exxel Pacific is the general contractor and Ankrom Moisan Architects the designer.

• Farther north on Western, Malcolm is working with Sellen Construction on a $73 million complex at Pike Place Market, designed by The Miller Hull Partnership, that will connect to the waterfront.

• Right in the shadow of the viaduct, Malcolm is preparing a vacant lot on Yesler Way for a 33-room expansion of the Best Western Plus Pioneer Square Hotel for the San Francisco-based owner. Rafn Co. is the general contractor and Rolluda Architects is the designer.

• Across from the rescue shaft where Bertha is being repaired, Malcolm is getting ready to start an 11-story residential building at 316 Alaskan Way S. for Gerding Edlen that will replace a parking garage abutting the viaduct. Lease Crutcher Lewis is the general contractor, and Weber Thompson and GBD Architects are the designers.

• Malcolm is working on the site of 200 Occidental, where Urban Visions is building a headquarters for Weyerhaeuser a few blocks from the viaduct. JTM Construction is the general contractor and Mithun is the architect.

Malcolm is also going after a sixth project: an office building at 450 Alaskan Way S. next to the viaduct, being developed by Los Angeles-based Hudson Pacific Properties. Here are the general contractors on the shortlist: GLY Construction, JTM and Lease Crutcher Lewis. The eight-story building also will have retail and one level of below-grade parking. NBBJ is the architect. 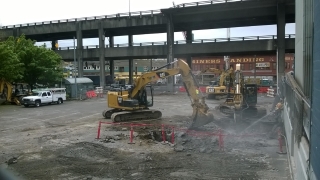 In March, Lease Crutcher Lewis moved its headquarters to 2200 Western Ave., across from the northern terminus of the viaduct.

Carey Crutcher Smith, Lewis' marketing director, said removal of the viaduct will make the space more attractive, but Lewis was also drawn by other big changes coming to the area, such as connecting Pike Place Market and the waterfront.

Smith said her firm is seeing a lot of interest from developers wanting to build near the viaduct — mostly office, housing, hotels and renovations.

Some developers want to time their projects to open soon after the viaduct is down, while others are a little further out. She said the problems with Bertha have delayed some construction starts, and that is pressuring those projects because construction costs are rising.

Smith said waterfront construction is uniquely challenging because the area is congested, sites are tight, the water table is high and some soils are contaminated. It also can be tricky to place cranes near the viaduct.

Work at 200 Occidental has been full of challenges for Malcolm, which has on the site two crawler cranes, a BG 40 drill rig, three excavators, a concrete boom pump and other heavy equipment.

Kvinsland said the soil is so poor that crews are installing 66 drilled shafts to support the seven-story office building. The reinforced concrete shafts are 4 feet in diameter and up to 85 feet long. About two dozen have been installed so far.

Malcolm also installed 98 soldier piles around the 2/3-acre site as shoring to support a 14-foot excavation for one level of parking.

“(This is) some of the worst ground I've seen in my life,” Kvinsland said.

Malcolm also has dug up some “surprises” including about 80 century-old wood piles, foundation pieces up to 4 feet thick, and debris from burnt buildings.