Illustrations by Stephanie Bower [enlarge]
The mayor says Entiat residents want a consistent small town feel, not a hodge podge, and maybe even a theme for downtown.

Keith Vradenburg grew up in the small town of Entiat along the Columbia River in Central Washington, and remembers how the downtown was thriving — until it vanished.

Starting in 1958, Chelan County Public Utility District bought the stores and houses and burned them down, and took out fruit orchards. In 1961, the PUD raised the water level 90 feet — flooding downtown Entiat — to help create Rocky Reach Dam just downstream.

“Whatever was there just disappeared, and they buried it under the Columbia River waters,” Vradenburg said.

Now Entiat wants its downtown back.

The city, which has a population of about 1,300, did a land swap and bought property to assemble a 20-acre stretch of waterfront on the Lake Entiat section of the Columbia River. The property goes for about a mile, from Pine Meadows Road to South Lakeshore Drive.

Vradenburg, who is the mayor of Entiat, said the city did a master plan and “applied for everything in the world,” receiving $4 million in grants to create a waterfront trail, water access points, parking and restrooms. A 65-slip marina is also planned.

Now the city is seeking proposals until May 30 from contractors and developers to help turn the 20 acres into a new downtown. For more information, see the notice in the May 1 DJC.

“What people are saying here is ‘get our city back,' which is stores, restaurants, hotels — anything we can get down there,” Vradenburg said. 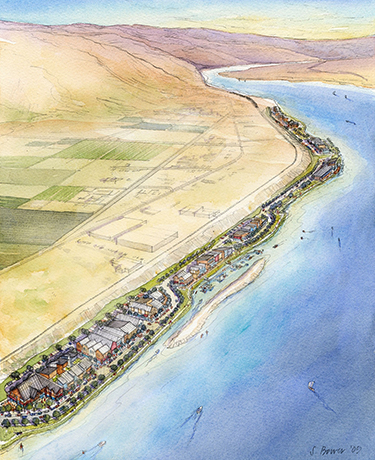 [enlarge]
The city has assembled a 20-acre stretch of waterfront land on the Lake Entiat section of the Columbia River, and envisions two-story buildings with a mix of offices, retail and housing.

Entiat will give long-term leases on commercial development pads in exchange for money to help construct the marina. “We don't have the money to do it ourself,” Vradenburg said.

One developer, he said, has already offered $3 million, but the community wants to see what others might come up with.

Entiat is on US 97A between Wenatchee and Chelan, about 170 miles from Seattle.

After the housing and many businesses disappeared, Entiat went from 1,600 residents to about 1,000.

The city moved to higher ground after Rocky Reach was built, but the mayor said nobody planned the new town. A few businesses opened and set up shop wherever, shotgun style.

In the 1960s, Entiat's economy was based on apples and lumber. Now work comes from a few fruit orchards, and the city is becoming a bedroom community for Wenatchee.

Some houses have been built lately and a few businesses have set up shop but Entiat needs more jobs, Vradenburg said, “something to keep the people here.”

Karma Wines recently opened a winery and tasting room, and he said other wineries have expressed interest. A Bitcoin “mine,” where employees search the Internet for Bitcoins, opened in June.

The city has been working on a new downtown for five years.

Officials bought 12 acres on the waterfront and gave Chelan County PUD property to expand Entiat Park in exchange for another eight acres.

The PUD spent over $6 million installing RV and tent sites, restrooms, showers and a boat launch in the park. Entiat plans to leverage that, along with the trail and marina, and try to draw visitors.

The city plans to hire an architect to create a site plan and get environmental permits for the 20 acres so developers would only have to get building permits.

Over the last decade, Entiat also has built new sewer and water systems, and a new fire station in anticipation of growth.

All this is pretty forward-thinking for such a small city, or as the mayor puts it, “We're way out of the box compared to a lot of people around here.”

Vradenburg attended Entiat High School and then taught science there for 41 years. Now retired, he goes to alumni events and that's where he said the idea of creating a new downtown was fostered.

The city is hemmed in by the Cascades and the Columbia and Entiat rivers, so it can only double in size, he said. That's partly why it wants to lease — not sell — pads for new development.

Entiat residents also are adamant about keeping local control over what gets built. They want a consistent small town feel, not a hodge podge, and maybe even a theme for downtown, Vradenburg said.

Mark Hafs and Mark Epstein worked on the downtown master plan at ESA, and took that work with them in 2011 when they started their own firm, Hafs-Epstein Landscape Architecture in Seattle.

Hafs said office, retail and multifamily are allowed in the one-mile stretch, and the city would like two-story buildings with a mix of uses, as well as a taller hotel.

The mayor said a few condos and vacation rentals would also be allowed.

To get the small town feel, Entiat wants arcades over walkways, set backs for structures and places to gather, Hafs said. Instead of large walls of glass, buildings would have smaller windows with mullions.

The marina should be a good economic driver, he said, because this part of Columbia River doesn't have as many places for water sports. Wineries, hiking, fishing, boating and skiing will also draw visitors.

Old photos show downtown Entiat was once cooking, he said.

“You can still see places where the former road goes into the river, and just disappears,” Hafs said.