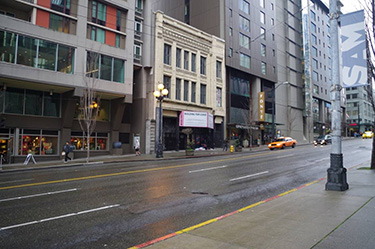 Photos courtesy Revolve [enlarge]
The Seven Seas Building has been vacant since 2010 when the Lusty Lady closed. 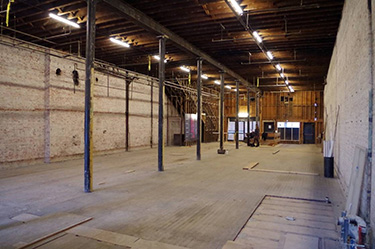 [enlarge]
Revolve will upgrade the structure and systems to create 43 hotel rooms.

The Lusty Lady always was famous for its witty marquee, and today it might simply say: “Suite dreams!”

A Seattle development company called Revolve said it has signed a ground lease with the Tolias family, which owns the Seven Seas Building at 1315 First Ave., and plans to renovate the 125-year-old structure to create a 43-room boutique hotel.

The six-story, 24,000-square-foot building has been vacant since 2010, when the adult entertainment business closed. It has entrances on First Avenue and Post Alley.

Revolve wants to begin construction early next year, and open the new hotel in spring 2017, said Dugan Earl, a partner at Revolve.

Revolve said the hotel will cater to “creative-class” travelers. John Schack, Earl's partner at Revolve, said the rooms will be small and “efficient,” without extra furniture that he says people rarely use.

Kirkland-based Q Hospitality Management is consulting on the project and will operate the hotel.

Revolve wants to have a 2,100-square-foot restaurant on First Avenue and a 2,000-square-foot speakeasy bar along Post Alley. On the roof will be a 2,400-square-foot open-air bar and event space.

Schack said guests will be drawn to the location, food and drink options, and rooftop views of Puget Sound.

“It starts to blur the line a bit between a place to stay where you have the ability to eat and drink, or a place you can eat and drink and also stay,” Schack said.

The structure was built in 1890 and was one of many hotels that lined First Avenue in those days. The Seven Seas name refers to that era, in the “golden age” of boat travel. Over the years, the building has been a hotel, tavern, housing, community service space and a shooting range.

In 1966, about half of the building was demolished to make way for a parking garage.

The Lusty Lady was the only tenant from 1985 until the peepshow closed in 2010.

The design is still coming together, but Schack said the interiors will reflect the building's history, from the 1890s to the Lusty Lady days.

The Tolias family has kept the building in good shape. Little remains of the Lusty Lady, and most of the interior has been gutted.

Renovation will include a full structural retrofit, new infrastructure, and a large light well through the center of the structure to provide light and air.

The facade will remain the same, as will some of the interiors and floors.

“In some ways it's like building a new building; every system needs to be redone,” Schack said.

Revolve has never done a renovation project like this, but Earl and Schack said they have worked on remodels in their individual careers.

Schack and Earl started looking at the building about 16 months ago. Like many people who have walked by it, Schack said they both thought “somebody should do something with that.”

Before approaching the owners with a pitch, Schack and Earl spent six months figuring out what kind of project made sense. Office space isn't an option because of the small floorplates. They chose a hotel over housing, Earl said, because it makes the most sense financially.

Revolve would not reveal the project cost, but Earl said they are working with a local bank to line up construction financing.

This will be Revolve's first hotel, but Earl said they want to do more in the future.

Earl said hotels are a new venture for Revolve, but the company still plans to do more apartment projects like those on Capitol Hill.