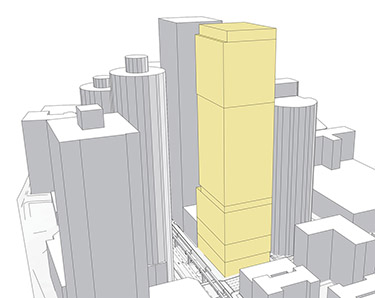 An entity related to Douglaston Development of New York paid $16 million for three parcels on Fifth Avenue between Virginia and Stewart streets where a 46-story tower is planned.

The seller is an entity related to G4 Capital Partners of New York. G4 was a lender on a previous project proposed for the site called Heron and Pagoda, which was two 46-story towers with office space, a hotel and condos. That project never came to fruition and G4 took the three parcels in 2009.

Perkins + Will is working on the Douglaston project.

The preferred design is an L-shaped structure that steps back on the south and west sides. The massing study shown here indicates the approximate size and volume, but not the final design.

This area along Fifth is poised for big changes. Along with Douglaston's project, Stanford Hotels Corp. of San Francisco is planning a 50-story tower at 1903 Fifth Ave. that will be a hotel topped by condos and apartments.