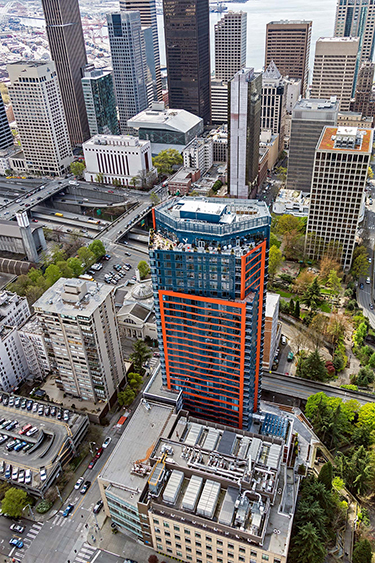 Photo by Francis Zera Photography [enlarge]
The studios and one- and two-bedroom units rent from about $1,500 to over $4,000 a month.

Laconia Development has leased half of the 335 units in Cielo, an apartment tower at 800 Seneca St. on First Hill.

California-based Laconia opened the first 13 floors of the 31-story building in February, and the remaining floors opened in March.

Some units are “urban one-bedroom,” which are open like a studio but have a partial wall to define the bedroom space.

The 469,000-square-foot concrete tower has orange accents. The amenities are on the first floor and the entire top floor.

Newbegin said the lobby is a large gathering area with lounge-style seating and artwork. A large plaza on the ground floor connects to Freeway Park.

Parking is provided for about 300 cars in five below-grade levels.

PCL Construction Services, the general contractor, says Cielo is the first residential tower in Seattle to pass a new energy code that regulates the energy efficiency of buildings. The code requires buildings to submit to a test, but they do not need to pass it.

Newbegin said Laconia has another apartment project — 400 units in a 43-story tower at Sixth and Wall — and is seeking a master use permit for that, but no other recent projects in the area.

“We like Seattle and would love to do more,” she said.