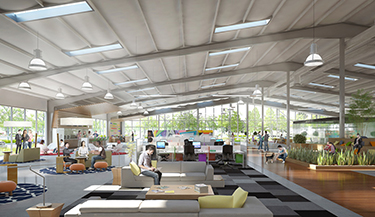 Wright Runstad & Co has landed its first tenant at the Spring District in Bellevue.

The tenant is a partnership of the University of Washington and Tsinghua University in China called the Global Innovation Exchange, an international technology institute.

Microsoft gave $40 million to the program, which will start with about 30 students but could enroll as many as 3,000 by 2025, according to a press release. The program, known as GIX for short, will occupy about 100,000 square feet but could grow over time.

Plans for the GIX building are still coming together. Construction will begin mid 2016, and it will take about 18 to 24 months to build, said Greg Johnson, president of Wright Runstad.

NBBJ is designing the GIX building.

The first students will start fall 2016 at a temporary location. The first program will be a master's degree in technology innovation, and more degrees and certificates will be added later.

GIX marks the first time a Chinese research university has established a presence in the U.S., according to the press release. GIX is set up to bring in other research universities as partners later, and industry leaders will also be involved.

The GIX facility will have computing and design labs, a prototyping facility and collaboration and presentation spaces.

Wright Runstad and Shorenstein Properties are developing the Spring District. The $2.3 billion neighborhood will be built around a future Sound Transit light rail station and could have up to 5.3 million square feet of offices, retail, housing and parks.

GGLO is the architect for all five buildings, and Walsh Construction Co. is the general contractor.

Security Properties has an option to buy an adjacent parcel and build about 250 more units there.