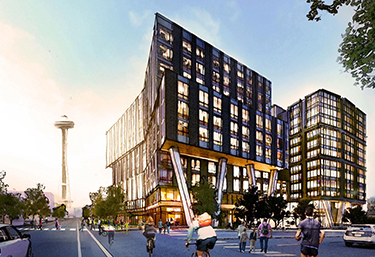 The office complex Kilroy Realty Corp. is planning in South Lake Union could look a lot different depending on which side you are viewing.

The site is at 333 Dexter Ave. N., and it is bounded by Harrison and Thomas streets, and Aurora and Dexter avenues.

The south tower would be the “active” one. A concave shape on the south side would allow for a public plaza and views of the Space Needle.

The north tower would be a “quiet” structure, though project documents say it would make “a robust architectural statement at this important intersection,” referring to Aurora and Harrison.

An east-west midblock pedestrian walkway is planned, and the buildings would be set back along Dexter and Thomas.

Floorplates would total 24,000 square feet, and the towers would connect at three levels so some tenants could have as much as 60,000 square feet on one floor.

The Miller Hull Partnership is the architect and GLY Construction is doing preconstruction services. Coughlin Porter Lundeen and Heffron Transportation are also on the team.

Mike Shields, Kilroy's senior vice president for the Pacific Northwest, told the DJC in May the $375 million project could start construction as early as next year, with completion by mid 2018.