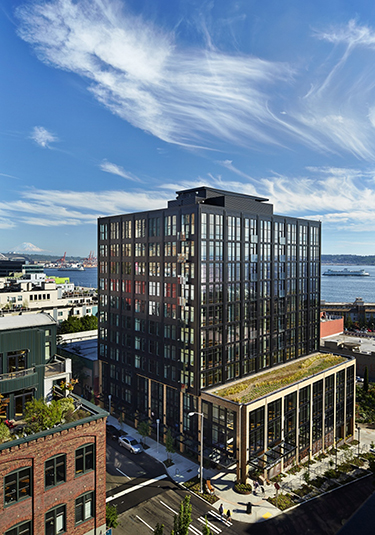 The Schuster Group says the 13-story Walton Lofts in Belltown has been open about a week and is 40 percent preleased.

The 136-unit complex is at Western Avenue and Vine Street, half a block from the Belltown P-Patch.

Shoesmith Cox Architects and VIA Architecture designed the project, and Turner Construction was the general contractor.

The Schuster Group is participating in Growing Vine Street, a community effort that started in the 1990s to treat the street as a watershed and create a street park.

Walton Lofts includes a system of runnels and weirs that capture rainwater from the roof, filter it through a green roof on the fifth floor, and move it through runnels on the exterior of the building to Vine Street. Water pours from a sculpture into the weir system where it is filtered before going into Puget Sound.

Other features in the building are a library, private guest suite for visitors, bicycle workshop and storage, rooftop pet walk, gym and a rooftop deck with views of Elliott Bay.

The Schuster Group is a Seattle-based real estate investment, development and merchant banking firm established in 1989.