46 apartments and shops leased in TOD above Beacon Hill station 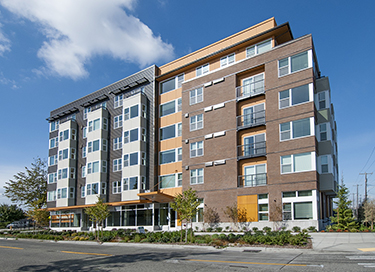 It first opened in the fall of 2014, and Pacific Housing said the units were the first market-rate apartments to open in the neighborhood in years.

The six-story building at 1636 S. McClellan St. was designed by Fish Mackay Architects. It shares the block with the rail station entrance.

The developer said it targeted young professionals as renters, but the units have attracted people of all ages.

The retail totals 2,000 square feet and is leased to Cafe Bengodi, and Fresh Flours Coffee and Bakery.

The Denning has a rooftop deck, community room and 18 underground parking stalls.

A stormwater bioswale along South McClellan Street was installed to filter rainwater from the alley and street.

Pacific Housing NW said the building has passive heating and cooling. A solar-assist hot water heater is being monitored by Seattle City Light and Bonneville Power during the first year of operation, and may be replicated on other projects.

LED lighting is used in much of the building, with motion sensors in stairwells and the parking garage. 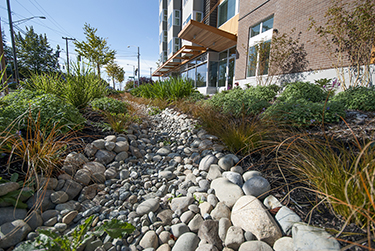 [enlarge]
A bioswale along South McClellan Street filters rainwater from the alley and street.

Tim Abell, principal with Pacific Housing NW, said his firm received a discount from HomeStreet Bank on the permanent loan because the lender liked the project's green features.

He said The Denning participates in the city's Multi-Family Tax Exemption program. The developer sets aside 20 percent of the units at a lower rent in exchange for a property tax exemption for up to 12 years on the residential portion. Those units must be rented to people making between 65 and 85 percent of area median income.

Pacific Housing NW does pay property taxes on the commercial portion and on the land.

The developer said it bought the 7,200-square-foot site in 2012 from the owner. The property had been a staging area for constructing the light rail station.

Pacific Housing NW plans to start construction in 2016 on Leaf and Twig, a project at 3309 Beacon Ave. S. that will have 18 apartments and 1,500 square feet of retail, along with a central courtyard.

The firm was founded in 2002, and builds market-rate housing on infill sites in Seattle. Among them is Squire Park Plaza on Jackson Street in the Central District for CADA.