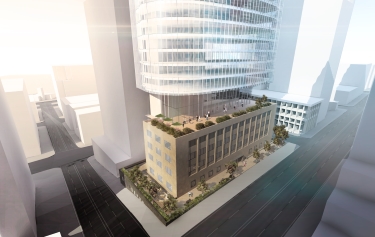 Images courtesy Perkins + Will [enlarge]
A three-story winter garden would sit between the existing structure and the new tower.

Martin Selig Real Estate's plans for the downtown Seattle building that once housed the Federal Reserve are out of the vault.

Martin Selig said his current plan is to build a 29-story tower above the four-story building at 1015 Second Ave. that was built in 1950.

A three-story winter garden would act as a “hyphen” separating the old and new structures.

The building is on the National Register of Historic Places, which impacts what Selig can do with the structure.

Selig will have to go through the city's Landmarks Preservation Board in addition to design review. If all goes well, Selig said he would like to begin construction by the middle of next year.

Crews would leave the outside intact but add new spread footings and build office space inside the structure.

The completed project would have 533,000 square feet of rentable office space, and reach the maximum floor area ratio that zoning allows, Selig said.

Perkins + Will is the architect, Lease Crutcher Lewis is the general contractor and KPFF Consulting Engineers is the structural engineer.

Crews would remove the floors in the existing structure to add new footings and underground parking. The floors will be put back in the same place they are now, Selig said. 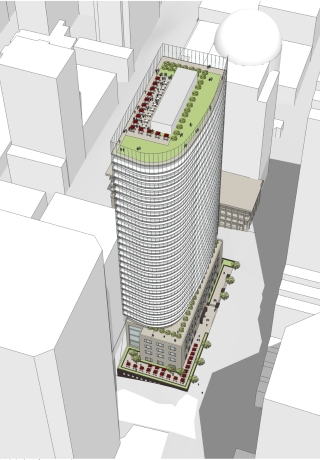 [enlarge]
The tower would be curved, with a rooftop seating area.

The tower would go up just like any other structure, Selig said, except that the lower floors would have the existing shell around them.

“You do not disturb the outside of the building in any fashion,” he said.

The lobby and teller cages on the first floor would be preserved, and the vault doors would become an architectural piece.

Selig bought the 90,000-square-foot building earlier this year in an auction from the U.S. General Services Administration. Selig outlasted seven other bidders and got the property for $16 million.

After it was constructed in 1950, the building housed the Federal Reserve until it moved to Renton in 2008.

It was designed by Bill Bain Sr., founder of NBBJ in Seattle, and is an early example of the firm's work.

Developers tried to buy the building for years. In 2008, there was a deal to sell it to Sabey Corp. for $19.75 million but that fell through after a preservation group filed a lawsuit.

Selig was one of five developers who tried to buy the building at that time. He offered $15 million. The others were Hines, Ariel Development and Touchstone.