SolTerra plans 1,500 apartments in Seattle and Portland — all platinum 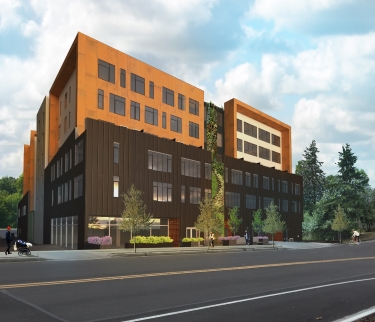 Images from SolTerra [enlarge]
Atlas is 98 apartments next to Newcastle Library. Units are designed to be LEED platinum.

Good fortune appears to be shining on SolTerra.

Thanks to a spate of new projects, the company has doubled the size of its staff over the past six months — with nearly 150 people in the Seattle and Portland offices. And there's more on the way.

“We are about to go on a big hiring spree in Seattle,” said Brian Heather, SolTerra president and co-founder.

Heather said SolTerra is looking for a larger building here to handle the additional workers, and would like to move into a new location in late 2016.

The company does development, design, construction and property management.

It is looking to hire architects, project managers, IT people, electricians, plumbers and concrete workers.

SolTerra communications director Melissa Milburn said the goal is to build 1,500 apartments in Seattle and Portland by 2018. All will be LEED platinum and all but one will be built with ICF blocks.

Heather said SolTerra wants to attract people with a green mindset, mostly millennials, to their projects. One of the goals is to get the residents to interact.

“We're looking to create a community unlike any other,” Heather said. “A lot of people are feeling alone with the advent of Facebook (and other social media).”

SolTerra now has seven projects in the works in the Seattle area, and just broke ground on one of them: a LEED platinum apartment called Atlas.

The Atlas site is on Newcastle Way, next to Newcastle Library, and the structure is designed to look like a stack of books, Heather said. There's another nod to the library: each apartment will have a wall of built-in bookshelves.

When it's finished next summer, Atlas will have 98 apartments in six stories, 2,000 square feet of retail, and four levels of underground parking for residents and library patrons.

Atlas will have a number of green elements: a 400-square-foot living wall, a 9,100-square-foot green roof, solar awnings and drought-tolerant landscaping. They are expected to reduce energy use by about 30 percent and reduce the need for irrigation by 70 percent. 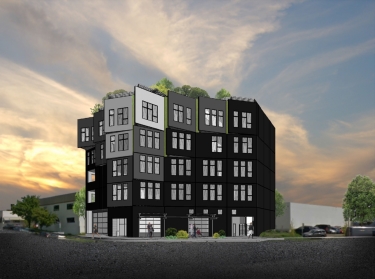 [enlarge]
SolTerra is using insulated concrete form blocks for its Portland office space, which will have a tree growing through the roof.

Heather said the garage will be built with shotcrete using a top-down construction method. The rest of the six-story building will be constructed with insulated concrete forms, including the floors. Heather said ICF floor panels will be 2 feet wide and up to 40 feet long.

The U.S. Green Building Council's website says there are only 18 multifamily mid-rise projects in the U.S. that are certified LEED platinum, including Sedona (phase one) and Sunset Electric in Seattle, and Beech Street Apartments in Portland.

Heather said his firm expects to build 12 platinum projects in the two cities by 2018.

SolTerra is a one-stop developer that focuses on building systems so it has more control over projects. Heather said the company self-performs the most complex parts — mechanical, electrical and concrete — and that allows it to build faster.

Some cost efficiencies come from designing their own HVAC units and having them built in Asia.

Heather said many apartment developers have tried to go green, but were dissuaded by lower returns on their investment.

“There's a lot of these dead boxes going up in Seattle ... designed by bankers,” he said.

In addition to the seven Seattle projects, SolTerra is working on six in Portland, including The Woodlawn, which was finished in February.

The four-story Woodlawn has 16 one- and two-bedroom apartments, and two live-work spaces. The firm says it also has the Northwest's largest living wall. 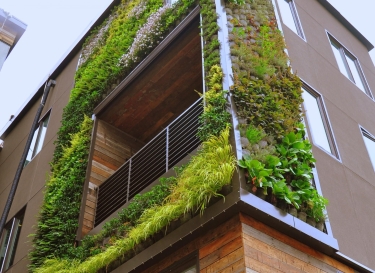 [enlarge]
SolTerra’s first project, The Woodlawn, is in Portland. The company says it has the largest living wall in the Northwest.

SolTerra declined to give specific details now, but here are some of the Seattle projects it is working on:

• Niwa, a 95-unit, six-story building on Queen Anne. Niwa, which means garden in Japanese, will have a “moss museum” with rock-like walls that grow moss and other vegetation. Crews will use shotcrete for the walls.

• Perch, a 115-unit building near Alki Beach, should break ground next year.

• Pike, a 60-unit building on Capitol Hill, will break ground in September and open in fall 2016. Heather said the retail will have “micro spaces” as small as 100 square feet so residents can stock inventory for online sales through sites such as Etsy.

• Parq will have at least 10 stories and at least 100 units in Belltown. Interconnected terraces, and slots for living walls and other plantings are planned. A park for residents will be on the ninth floor.

Milburn said SolTerra is looking at properties on Capitol Hill and the International District.

The Portland projects include a new office building for SolTerra that began construction in late May at Southeast Ninth Avenue and Southeast Division Street. That LEED platinum building will have 35,000 square feet of office, retail and warehouse space. A large tree will be in the center, surrounded by glass.

Milburn said the tree will grow through the roof of the five-story building. ICF construction will allow the structure to carry the extra weight, she said.

Milburn said the Portland office will be the tallest ICF building on the West Coast when it is finished early next year.

The Parq building in Belltown, which won't start construction until 2017, would eventually eclipse that.

SolTerra is working with Quad-Lock of Surrey, British Columbia, to manufacturer ICF blocks for the Portland office.

Quad-Lock sales director Kevin Davis said crews are working on the slab, and will start stacking ICF blocks in about two weeks. The shell should be finished by year end.

Davis said they are building a mock-up in Portland so that crews and designers can see how corners and other elements fit. He said the plan is to reuse the mock-up as a sales and training tool. It will be about half the size of a shipping container and crews will be able to disassemble it to fit pieces on pallets for transport.

Davis said about a dozen mid-rise dorms have been built with ICF in the last 18 months in three university towns in Ontario, Canada. The buildings are about 15 stories.

Davis said schools are interested in speed and energy efficiency.

Construction Canada, a publication of Construction Specifications Canada, reports that about 80 mid-rise dorms and apartments have been built in Ontario over the last decade using ICF. Several are in the 20-story range.

Milburn said SolTerra also wants to get the community involved in its designs so the projects reflect their neighborhoods.

SolTerra has more than 100 investors, including individuals and investment funds. Most are from Washington and Oregon, but a few are from overseas. The company got a big break in 2013 when Heather formed a partnership with James Wong, a tech expert and entrepreneur.

Mixed-use apartment construction made up about half of SolTerra's revenues last year. Heather said that will jump to 70 percent this year and 80 percent in 2016.