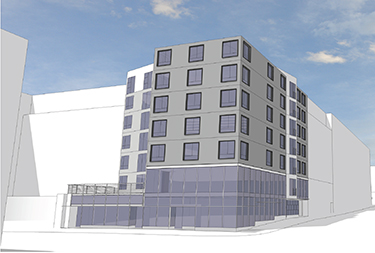 A Seattle design-review board will meet at 6:30 p.m. Wednesday to get its first look at plans for a 90-unit apartment building at 722 E. Pike St., at the northwest corner of Pike and Harvard Avenue on Capitol Hill.

The meeting will be at Seattle University's Admissions and Alumni Building.

Johnson Carr LLC is the developer and Skidmore Janette is the architect.

Plans filed with the city show a seven-story structure with 4,000 square feet of street-level commercial space. The efficiency units will range from about 225 to 335 square feet. No parking is proposed.

The design team notes that the building is intended to provide affordable housing in an urban neighborhood.

A two-story commercial building on the site would be demolished. It houses the 95 Slide sports bar and a Vietnamese restaurant called Pho Le's.

The retail would face Pike and residential access would be off Harvard. The site is across Harvard from a Seattle Central College building.

Johnson Carr's building would join a pair of other new projects on the block. One is Pike Motorworks, a 260-unit mixed-use complex being developed by Wolff Co. that would wrap around the north and west sides of this building. The new Cue Apartments, which houses Bill's Off Broadway restaurant, is at the north end of block, at 721 E. Pine St. Cue has 93 units and was developed by Denny Onslow's O&S Partners.

Johnson Carr is seeking a departure to demolish the 95-year commercial building on its site. The design team acknowledges in its notes that the building is old enough to be considered a character structure. But the team said the building is not worth preserving because it lacks historical and architectural significance, and doesn't contribute to street-level transparency.

Nevertheless, the developer is seeking to use the city's 3-year-old transfer of development potential program to gain an extra 10 feet of height for the structure. The program allows owners of character structures to sell development rights to eligible “receiving sites” in the Pike-Pike neighborhood.

The “sending site” would be Capitol Hill's Melrose Market, a triangular block of historic automotive buildings that was redeveloped in 2010.

The Johnson Carr team says its design will be more compatible with the building's next-door developments, both of which are preserving portions of character structures and gaining an additional 10 feet of height.