44 apartments for Broadway site across from light rail station 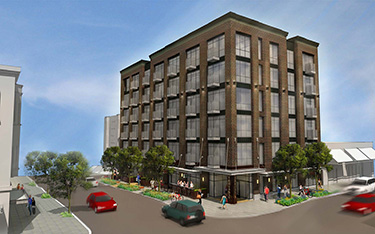 Studio Meng Strazzara will present the latest design for a six-story apartment building proposed for the site of the Broadway post office on Capitol Hill.

The design-review meeting is scheduled for 8 p.m. today at Seattle University's Admissions and Alumni Building, and the review board will make a recommendation.

An entity related to the real estate firm Henbart LLC acquired the 7,200-square-foot site in 2012 for $2.95 million. It's at 101 Broadway E., at the northwest corner of Broadway and East Denny Way, across the street from the Capitol Hill light-rail station due to open next year.

Henbart's plan is to demolish the post office and construct an apartment building with 44 market-rate units, a rooftop deck and street-level retail. Four surface parking spaces for the public would be accessible off the alley on the west side of the building.

One retail space would be at the corner of Broadway and Denny, and a smaller space would have a storefront on Denny. The apartment lobby would also be on Denny.

Other design team members are Blueline, the civil engineer, and TRA, the landscape architect.

Henbart President Mark Craig told the DJC last year that the U.S. Post Office's lease expires at the end of 2015.