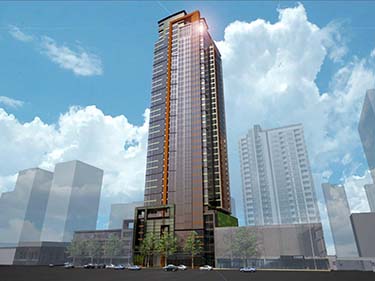 Firms working on three of Lobsang Dargey's real estate projects have stopped work and more could follow because of the civil action against him by the U.S. Securities and Exchange Commission.

PCL Construction is the general contractor for Potala Tower, a 41-story high rise that Dargey's companies, Dargey Development and Path America, are developing at 2116 Fourth Ave. in Belltown. Tom Doig, PCL vice president and district manager, said Wednesday the firm is suspending work on the project. He added “we are hopeful that a quick resolution to the issues can be reached.”

Joel Wilbur is a principal at Caron Architecture, which is designing apartment projects for Dargey in Shoreline and Kirkland. He said his firm is suspending work on both until the case gets sorted out.

“Right now, we are all going to be at the mercy of this order and the proceedings that will happen over the next (few) weeks,” Wilbur said.

John Wolfe of Orrick Herrington & Sutcliffe in Seattle is representing Dargey but declined to comment.

The SEC action was filed in U.S. District Court of Western Washington on Monday. It alleges Dargey, and various entities he controls, misused $17.6 million raised from foreign investors through the federal EB-5 program, which gives foreign nationals an opportunity for U.S. residency in exchange for investing in job-creating projects and businesses.

According to court documents, 250 people invested approximately $125 million to build the 41-story hotel and apartment tower in Belltown and a mixed-use apartment complex with an indoor farmers market in Everett.

On Monday, a judge authorized the SEC to freeze Dargey's assets and accounts, and he is barred from raising any more money from investors. This order is temporary. The next step is a hearing Sept. 14 to keep those restrictions in place until the case is resolved.

Jina L. Choi, director of the SEC's San Francisco regional office, said in a statement Tuesday, “We allege that Dargey promised investors their money would be used to develop specific real estate projects approved under the EB-5 program, but he misused millions of dollars to enrich himself and jeopardized investors' prospects for U.S. residency.”

Robert Westinghouse of the Seattle law firm Yarmuth Wilsdon is a former prosecutor for the U.S. Department of Justice and now focuses on white collar criminal defense, including SEC cases. He said he is not familiar with details of the Dargey case, but said fraud cases generally can leave behind a trail of victims. If fraud charges hold up, he said victims can attempt to recoup losses, but some may be out of luck.

With Dargey's assets frozen, Westinghouse said it is unclear what will happen to the firms working on his projects.

“They're not going to get paid anything right now, and whether they get anything down the road will depend on the judicial process,” he said.

The foreign investors also have a lot at stake. The SEC alleged Dargey knew that U.S. Citizenship and Immigration Services can deny the investors' residency applications if their money is used for purposes other than the approved business plan presented to USCIS, in this case the projects in downtown Seattle and Everett.

Dargey is accused of not telling investors he was using their money on other projects.

The SEC case focuses on money raised for the projects in downtown Seattle and Everett.

Here is a quick overview of those developments and others Dargey is working on:

• A six-story, 220-unit apartment project with an indoor farmer's market at 2900 Grand Ave. in Everett was scheduled to open this summer. BCV Architects of San Francisco designed the market, and Studio19 Architects of Seattle designed the apartments. Synergy Construction is the general contractor. Steve Carlin, a retail consultant, helped plan the market and secure tenants.

• At 4003 S. Othello St. near the Othello light rail station Dargey is planning 500 apartments and a farmer's market.

• A project in Shoreline would have two-seven story apartment buildings with 309 units at 15560 Westminster Way N. Caron Architecture is designing the project.

• At 1006 Lake St. S. in Kirkland Dargey is planning a 59-unit apartment project designed by Caron Architecture. The project initially had 143 units but was downsized after pressure from neighbors.

Court documents say Dargey used $2.5 million of the allegedly misappropriated funds to buy a house in Bellevue in the name of a trust of which he is the beneficiary. He also is accused of withdrawing more than $350,000 in cash from accounts for the Seattle tower and the Everett mixed-use project.

Court documents say approximately $200,000 of that was withdrawn at 14 casinos in Washington, Nevada, California and British Columbia. Dargey made 44 withdrawals at Snoqualmie Casino totaling $99,132 between October 2012 and June 2015, the documents say.