As towers go up, one big site still sitting empty 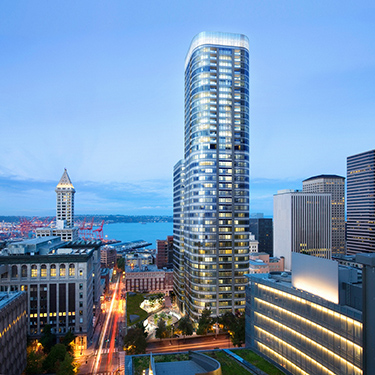 Image courtesy of GGLO and Foster+Partners [enlarge]
Triad was picked to develop Civic Square after a request for proposals in 2006.

South downtown has joined Seattle's building boom, with two office towers under construction along Fifth Avenue between Madison and Columbia, and another new mixed-use project on Fourth just announced.

But one big site — the full block bounded by Third and Fourth avenues and James and Cherry streets — remains undeveloped. It was once home to the Public Safety Building.

Triad Development, an affiliate of Triad Capital Partners, is planning a 43-story mixed-use project there called Civic Square, with office, housing and retail.

Triad may not be talking about the project, but it applied for a shoring and excavation permit in April, and a construction permit in June. Permitting work for the site has been active throughout the summer.

Civic Square will be the last piece of the city's 1999 civic center master plan, which led to construction of Seattle City Hall and the Justice Center, and remodeling of Seattle Municipal Tower.

Triad was selected to develop the Civic Square site after a request for proposals in 2006.

Triad shelved the project during the recession. Several years ago, the developer resumed permitting and started looking for tenants and financing.

Triad has a purchase-and-sale agreement to acquire the site, and that deal is set to expire at the end of the year.

The city would transfer the block to Triad and, in exchange, Triad will build a public plaza with retail and services that the city will own.

The city values the deal at approximately $25 million, which reflects the value of the plaza and improvements.