Belltown site on Second may get housing project

By LYNN PORTER
Journal Staff Reporter
Photo courtesy of NK Architects [enlarge]
The Wayne Apartments at 2224 Second Ave. will be considered for city landmark status. A 124-unit residential building could be built there. 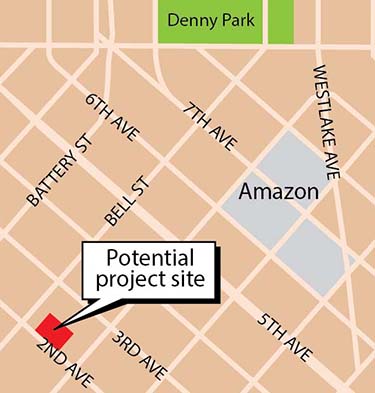 Wood Partners has filed preliminary paperwork with the city to build about 124 residential units on three parcels adjacent to Mama's Mexican Kitchen in Belltown.

The project would also have street-level retail and below-grade parking, according to Bryan Stevens, a spokesman with the Seattle Department of Planning and Development. A site plan on file with the city says the existing buildings would be demolished.

The property is being advertised for sale on Paragon Real Estate Advisors' website. The ad says it is three parcels at 2214, 2216 and 2224 Second Ave. The site totals 19,400 square feet and is in an “unbeatable Belltown location” close to the central business district, waterfront, Queen Anne and South Lake Union.

Tula's Restaurant and Jazz Club is at 2214 Second, and a three-floor mixed-use building that dates from the late 1800s is at 2224 Second.

Rain City Properties LLC, owns the site at 2224 Second. John Lindgren and Brad Smith, both with Seattle addresses, are managers of the LCC.

Zacri Inc. of Seattle owns the two other parcels.

Curt Ryser with Zacri said he is negotiating with Wood to buy his property, but it has not closed.

Steve Yoon with Wood Partners could not be reached for comment late Monday.

The Wayne Apartments at 2224 Second Ave. will be considered for city landmark status by the Seattle Landmarks Preservation Board. The meeting is Wednesday at 3:30 p.m. in Room 4060 of Seattle Municipal Tower, 700 Fifth Ave.

Landowners sometimes ask the board for a ruling if they are considering redeveloping property. A designated landmark cannot be altered or significantly changed without approval from the board. It may be demolished only if the owner can demonstrate that there is no reasonable economic use.

The application is at http://tiny.cc/o56o2x under “current nominations.” It says there is a three-level, mixed-use building on the site, with three storefronts at street level, and 17 apartments above.

The apartments were originally three rowhouses constructed between 1888 and 1893. They pre-date the Denny Hill regrade and “represent a once-common but now extremely rare rowhouse building form in Seattle, although this example has been altered,” according to the application.

In 1911, the rowhouses were raised and the one-story unreinforced masonry commercial structure was constructed underneath. The application notes that this was presumably to improve the viability of the structure following the regrade of the Second Avenue portion of Denny Hill, which was completed around 1906.

The building has been called a “regrade hybrid,” referring to one- and two-story frame buildings from the late 19th century and early years of the 20th century that were raised so a retail floor could be slipped underneath to meet the newly graded street, according to the application. This occurred in Seattle's regraded neighborhoods, which are primarily Chinatown/International District, the Central Business District, Pike/Pine and Belltown.

The 124-unit residential building that Wood Partners filed paperwork on would be next to Mama's Mexican Kitchen at Second Avenue and Bell Street. DPD has received preliminary paperwork for an eight-story, mixed-use building where the restaurant is now, with 60 apartments over ground floor retail and 15 parking spaces below ground, according to Stevens.

The Seattle Times reported that Minglian Realty, a Richmond, B.C.-based affiliate of a Chinese development firm, now owns that property.