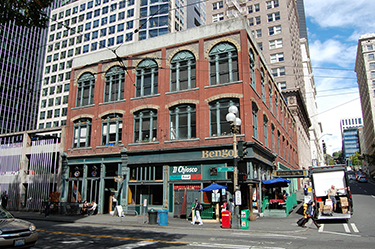 DJC photo by Jon Silver [enlarge]
The partnership is called Good Arts LLC, named after a cafeteria called Good Eats that was in the Scheuerman Building a century ago.

A group of Seattle people that includes real estate developer Greg Smith has formed a partnership to buy the Scheuerman Building at 110 Cherry St. in Pioneer Square and turn it into an arts hub.

The group is under contract with Aegis Building LLC to buy the 24,406-square-foot office and retail building that was constructed in 1890. The sale price is $4.7 million.

In addition to Smith of Urban Visions, the partners are Jane Richlovsky of ‘57 Biscayne; Steve Coulter, technical director for ACT Theatre; and Ali Ghambari, who operates Cherry Street Coffee House and is partners with Smith in that business.

The arts hub partnership is called Good Arts LLC, named after a cafeteria called Good Eats that occupied the Scheuerman Building a century ago.

Cherry Street Coffee House will move from its current location across Cherry Street into the building after the current tenant moves out in October of 2016, Richlovsky said.

She said the new owners want to have street-level art galleries and pocket retail space for artists. Eventually they will add more artist studios and restore a performance space in the basement. The Skid Road Show operated there from 1972 to 1982, and it was a jazz club during the 1940s, according to a press release from the group.

In an interview yesterday, Richlovsky said she has a master lease for the second floor that expires next year. She has her own studio in part of the space and sublets the rest to artists as ‘57 Biscayne.

Richlovsky said she has had a studio in Pioneer Square since 2001. She was one of the artists who was relocated from the 619 Western Building in 2011 before it was renovated by the Washington State Department of Transportation to prepare for construction of the viaduct replacement tunnel. She said she took advantage of the neighborhood's then-low rental rates and relocation funds from DOT to lease space in the Scheuerman Building.

The new ownership group said its goal is to provide long-term stability for artists, who they say are missing in many urban areas. Artists have helped struggling neighborhoods in Seattle and elsewhere become highly desirable real estate markets, only to find themselves priced out.

“It's happened in Capitol Hill,” said Richlovsky. “It's in danger of happening here in Pioneer Square.”

Richlovsky said she spoke at a TED conference at Penn State where she said permanent havens for artists are part of the American Dream, and urged artists to take control of their business and real estate needs.

Ghambari spoke this year at TEDxKirkland about creating human connections and community with his coffee business. He received the Seattle Center Foundation American Dream Award this year.

Smith is developing Weyerhaeuser's new headquarters a few blocks away from the Scheuerman Building. According to the release, Smith said he wants to help preserve studio spaces and the neighborhood's creative energy.

Richlovsky said the gallery spaces will need very little work. Coulter designed '57 Biscayne's floor plan and is working on designs for the additional work spaces. She said other work will be done in phases as leases expire.

Karen True of the Alliance for Pioneer Square introduced Smith to Richlovsky and Coulter.

The Good Arts LLC is registered to Smith now. Richlovsky said the group will “divide up percentages” and make an operating agreement before closing.