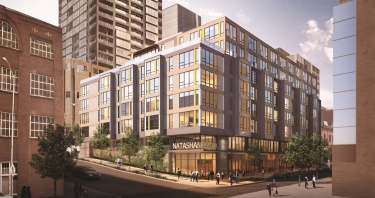 A San Francisco-based firm called JDA West recently purchased a site in Seattle's Belltown neighborhood where an eight-story mixed-use project is in the works.

The site is now a parking lot at 2134 Western Ave., at the southeast corner of Western Avenue and Blanchard Street.

JDA West purchased the half-acre site for $8 million from the Toulouse Children Partnership. A related family entity paid $600,000 for the site in 1991.

The mixed-use project planned for the site is called Natasha, with 152 apartments, 5,700 square feet of retail and 153 parking stalls.

The Toulouse family had hired Joesph Strobele under the entity Brick Road LLC to develop the property.

Last month the Department of Planning and Development issued an environmental determination of non-significance with conditions for the project. The appeal period expired Aug. 27.

JDA West says on its website that it seeks to acquire land for 150- to 300-unit apartments and mixed-use projects in major West Coast markets such as San Francisco, Los Angeles, San Diego, Seattle, Portland and Denver.

Marc Wyzykowski, a manager with the company, told the DJC that the Belltown project will be its first in Seattle.

“We are excited to have this project with its close proximity to Pike Place Market,” he said.

The company says it has in-house equity investors and lending relationships with “a broad network of national, regional and local lenders.”

JDA West is part of a group of affiliated companies, including Johnson Development Associates, The Haven Apartment Communities and OTO Development, a hospitality company. The affiliates are based in Spartanburg, South Carolina.

The Belltown project is being designed by Clark Design Group. Thomas Rengstorf & Associates is the landscape architect.

The apartments would include a mix of studios, open one-bedroom, one-bedroom and two-bedroom units. The lobby would be at the corner of Western and Blanchard. Parking would be accessible from an alley off Blanchard.

Retail is planned for the length of the building along Western.