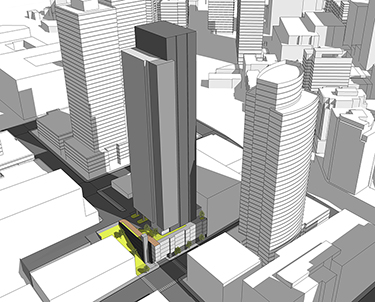 Mack Urban wants a hillclimb and public plaza to be a prominent piece of the 43-story apartment tower it is planning at 1001 John St., in South Lake Union.

The tower will have about 430 units, 2,800 square feet of retail and 300 underground parking spaces.

The developer plans to put the tower on the southeast portion of the site to maximize views of the Space Needle from the public space. The hillclimb will help people navigate the 53-foot grade change between John Street and Terry Avenue North.

“We found the topography to be less of a challenge and much more of an opportunity,” said Paul Keller, founding principal and CEO of Mack Urban.

Mack Urban — and its predecessor companies — have experience using this kind of elevation change to create a public benefit.

Harbor Properties, which eventually became part of Mack Urban, built Harbor Steps with a hillclimb at University Street between First Avenue and Western.

Martha Barkman is Mack Urban's vice president of development, and she was the project manager for Harbor Steps.

“I know firsthand how powerful pedestrian connections can be in making Seattle a walkable city,” Barkman said in a press release about the John Street tower. “I'm really pleased that we could make this part of our project. It's responsible, urban design.”

The hillclimb will also have an elevator. Mack Urban will build a public plaza on the site connecting to John Street and The Seattle Times park.

CollinsWoerman is the architect. Keller said Mack Urban has solicited proposals from three general contractors and is planning to make a decision by the end of the month.

This is the developer's first project in South Lake Union, but not its first high rise in Seattle. It built Viktoria, a 24-story apartment building on Second Avenue between Virginia and Stewart, working with Goodman Real Estate and Capri Capital Partners.

“We are in the business of continuing to raise our game and continuing to provide product that people recognize is of superior quality,” Keller said, “and we operate these buildings at a high level that makes people want to live in them.”

Keller said he has talked to other firms planning projects nearby such as Amazon.com, Onni Group and Holland Partner Group, but one firm Mack Urban hasn't been able to connect with is H5 Capital.

Keller said Mack Urban's primary focus right now is reaching out to nearby stakeholders, and putting together clear and concise plans for design review, but he said he is concerned about having an issue down the line with H5 about the number of towers on the block and where they are located.

Seattle's zoning rules limit the number of towers that can be built on each block in South Lake Union.

“The unfortunate reality right now is it appears that we are headed toward a potential conflict from a planning perspective,” Keller said.