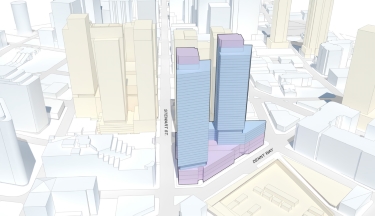 Image by Henriquez Architects [enlarge]
Ian Gillespie of Westbank Corp. filed plans to build a modified version of the Lexas Cos. proposal from 2007.

Back in 2007, Lexas Cos. came forward with what must have seemed like an audacious plan to build two 36-story condo towers at 1200 Stewart St. in the Denny Triangle.

By 2009, the proposal included 250 hotel rooms and a large sports club. The city granted the project a master use permit the following year.

Lexas principal Eric Midby told the DJC in 2009 that he hoped to begin construction by the spring or summer of 2010.

Of course, residential construction came to a halt during the Great Recession.

Today, the full-block site — bounded by Stewart, Denny Way, and Minor and Yale avenues — is still a mix of surface parking lots and single-story retail buildings.

But all that could change.

A Vancouver, B.C., developer called Westbank Corp. wants to revive the project, and has filed plans with the city to build a modified version of the Lexas proposal.

Westbank founder Ian Gillespie is listed in documents as the financially responsible party.

A Seattle design review board is tentatively scheduled to hold an early design meeting at 5:30 p.m. Nov. 17 at Seattle City Hall, Room L280.

The revised proposal is for two 38-story towers containing 892 residential units above a two-story podium and underground parking for 970 vehicles.

The architect is Henriquez Partners Architects of Vancouver, B.C. Tiscareno Associates filed for the original master use permit, which expires in August 2016.

PFS Studio of Vancouver, B.C., is the landscape architect.

Henriquez is proposing a number of design changes, though the 400-foot tower heights remain the same.

The new plan replaces the 250-rooom hotel with more residential units, so the covered entrance for the hotel would also disappear.

A public benefits package that includes sidewalks, landscaping and open space would remain in exchange for getting an alley vacation.

The architects make clear in the documents that they are aware of all the projects planned in the vicinity of the towers, and said their design will “better respond to the contextual changes that have occurred in the intervening years since the master use permit application in 2010.”

For example, the towers would be positioned to minimize the impact on views from another two-tower project proposed by Miami-based developer Crescent Heights at 1901 Minor Ave., on a neighboring block.

Nearly a dozen projects are proposed or underway nearby, a few of which are shown here in the illustration. They include Onni Group's four-tower, 1,910-unit project at 1120 Denny Way and 1120 John St., Seattle City Light's Denny Substation at 1250 Denny Way, a 40-story tower by Security Properties at 1823 Minor Ave., and 42-story mixed-use tower by RBF Property Group and GIS International Group at 1121 Stewart St.

Gillespie conceived of the Lincoln Square complex in Bellevue in the mid-1990s, and spent years moving it through design, permitting and financing as the economy heated up during the dot-com boom.

He started the first phase and secured financing from Lend Lease Corp., which subsequently replaced him as the developer. Construction was halted in 2002 and Kemper Development acquired the project in 2003 for around $40 million, after more than $200 million had been spent on it.