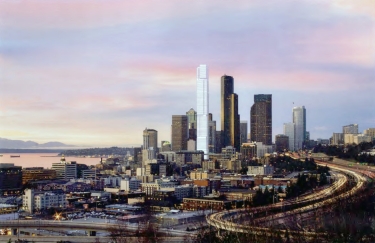 Images courtesy LMN Architects [enlarge]
The complex would total more than 1.4 million square feet, with 1,200 housing units in a tower above office space, a hotel and retail.

Crescent Heights Inspirational Living, a developer based in Miami, filed a draft design review packet with the city yesterday showing the first images and more details about 4/C, its proposed tower at 701 Fourth Ave.

The Fourth and Columbia tower would be 1,111 feet tall, which would make it the tallest tower on the West Coast. The plan is for 102 stories.

The document lists a figure of $290 million.

The massing study indicates the approximate size and volume, but not the final design.

LMN Architects is designing the project.

Documents show a 240-foot podium that would contain retail, office space and the hotel. The podium takes up most of the half-block site on the west side of Fourth Avenue between Columbia and Cherry streets. A slimmer residential tower would sit on top of the podium.

Crescent Heights' preferred option has vertical and horizontal segmentation, or “cuts”, on the exterior to break up the facade. Some of the cuts would be at the height of significant structures in the city's history such as Smith Tower, Columbia Center and the Space Needle.

“By modulating the facade, the design avoids the monolithic extrusion typical of most high-rise towers and feels more like a stitched-together urban community,” the documents say.

The area around Crescent Heights' project is busy during the work day, but there is little to do at night.

Crescent Heights said in the documents that the area is changing, and new housing will bring in more around-the-clock activity.

“New building trends clearly show a movement toward a downtown that is active 24 hours a day, seven days a week,” according to the documents. “Proposed buildings around the site will create amenities that will be open at all hours of the day. Creating residential units in this area will allow people to live where they work and relax.”

A document filed with the city earlier this week indicates Howard Howlett of LMN Architects is working with the Federal Aviation Administration to ensure the tower doesn't interfere with airplanes taking off or landing at Boeing Field.

Notes from a Sept. 9 meeting with the city indicate Crescent Heights would like to begin construction in 2017.

Crescent Heights last week paid $48.75 million, or $1,707 per square foot, for the half block. The seller was the Costacos family.