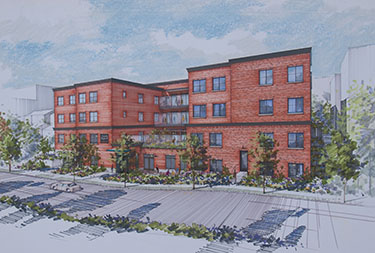 Image from Living Care Lifestyles [enlarge]
The second-story terrace will have a patio, barbecue, putting green and wandering path.

“Our research indicates there is a significant unmet demand for seniors in the city and surrounding areas that needs to be taken care of, and this new state-of-the-art community will do just that,” said Denis Bryant, CEO and president of Living Care Lifestyles, in a news release.

Quail Park Memory Care Residences of West Seattle will cost $22 million. It will be built on a half-acre site along California Avenue Southwest and Southwest Alaska streets. Opening is set for early 2017.

Quail Park will have 46,300 square feet on four levels. Three residential levels will each have their own central common area. Forty-five rooms will be provided for dementia and Alzheimer's residents, with a capacity of 66 residents.

Administrative offices, utility spaces, a plaza and salon will be on the street level.

Spaces will be divided into “neighborhoods” that reflect the history of West Seattle.

A second-story rooftop terrace will have a landscaped patio with seating, a barbecue, putting green and wandering path. A large common area will separate the wings and look down on the terrace. There also will be a theater, dining area and bistro.

The building will have a lounge, activity space and water features.

Portland-based architect John Lape is the designer. Morningside Development Group LLC is the developer. LCG Pence Construction is the general contractor. Pence has an office in Portland.

Living Care said the project will use contractors, subcontractors and suppliers mostly from West Seattle. About 100 workers are expected to be onsite over a year of construction.

Staff at Quail Park will be trained to be “culturally competent” when it comes to caring for lesbian, gay, bisexual and transgender seniors. Training will be through Northwest LGBT Senior Care Providers Network and SAGE National Resource Center.

SAGE stands for Services and Advocacy for GLBT Elders. It was founded in 1978 in New York City.

Seattle-based Living Care Lifestyles also has communities in Lynnwood as well as California, Hawaii, Oregon and Texas. John Lape's website indicates another Quail Park memory care community is planned for Bremerton, as well as an expansion at the Lynnwood property.