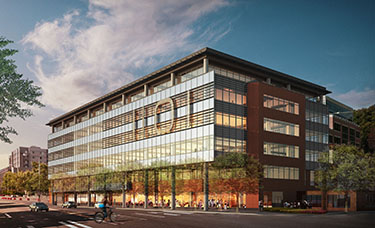 An entity related to Invesco Real Estate has purchased 1101 Westlake, a six-story office building that is under construction in South Lake Union, for $151.5 million, property records show.

An entity related to Holland Partner Group is developing the 150,000-square-foot project and sold it to Invesco.

The building is set to open in December, according to a countdown on the project's website.

MG2 is the architect for 1101 Westlake and Holland is building it.

1101 Westlake is part of Holland's 5.5-acre Westlake Steps project, which includes more than 700 apartments and the Casey Family Programs building that will be Pemco Insurance's new headquarters once a renovation is completed.

Holland paid $79.5 million in 2013 for the much of the land bounded by Dexter, Westlake, Galer and Aloha for Westlake Steps.

In the last few years, Invesco has spent approximately $530 million on Seattle-area apartments, including The Bravern Signature Residences in Bellevue and Vulcan Real Estate's The Martin in Seattle.