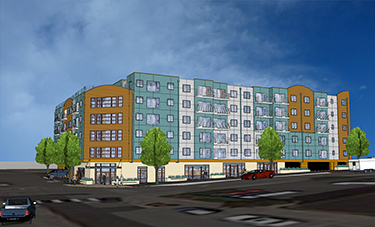 Image courtesy of Village Concepts [enlarge]
The Adriana will have 119 senior apartments in five stories.

Brian Scalabrine made millions sinking shots in the NBA for the New Jersey Nets, Boston Celtics and Chicago Bulls.

Now Scalabrine is sinking some of that basketball money into a $23 million retirement community that Village Concepts is building in Des Moines. All the apartments will be for seniors earning 60 percent or less of the area median income.

How did the former NBA player become an investor in local senior housing?

Scalabrine played basketball at Enumclaw High School and Highline College in Des Moines before transferring to the University of Southern California. That's the local connection.

His interest in bettering life for seniors stems from childhood visits to his grandparents' “not-so-nice” trailer park.

Scalabrine is a friend of Peter Jorgensen, the CFO at Village Concepts. Scalabrine owns a site at 22525 Seventh Ave. S. in downtown Des Moines that he wanted to redevelop, while Village Concepts was looking to expand its portfolio of 15 retirement and assisted-lived communities. The pieces came together.

“Des Moines is an underutilized area on the waterfront that has the potential to be a spectacular place to live,” Scalabrine wrote in an email. “Hopefully this project revitalizes the downtown area and inspires other people, businesses and developers to make this area live up to its full potential.”

The property had a house that was converted to a small office on it. Crews recently demolished it to clear the lot, which is a few blocks from the city's marina.

The project is called The Adriana, which is a combination of Scalabrine's daughters' names: Adria and Elliana.

Stuart Brown, COO at Village Concepts, said they hope to start construction in early November on the 101,427-square-foot building. It will be five stories and have 119 senior apartments when it opens in fall 2016.

Residents will have use of an atrium, social room, media room, kitchen, beauty salon, fitness room and computer room. Each apartment will have its own washer and dryer.

The project team is led by Express Construction of Bellevue and Jeffrey J. Hummel Architects of Seattle. Engineers are CG Engineering of Edmonds and Emerald City Engineering of Mountlake Terrace.

Andy Langsford of Bellevue-based Venture Real Estate Group is one of Scalabrine's investment partners. Village Concepts also has equity in the project.

Citi Community Capital of Thousand Oaks, California, is the lender and City Real Estate Advisors is the tax credit investor. City Real Estate is based in Indianapolis and has an office in Portland.

Federal Way-based Village Concepts was founded in 1975 to manage properties and consult with owners of assisted-living communities. Brown said they added retirement homes about eight years ago to expand their business.