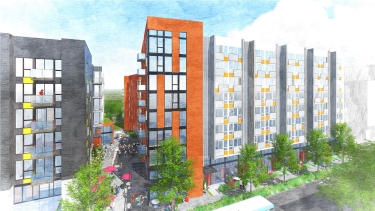 Images courtesy of Mithun [enlarge]
Security Properties is seeking permits for a second phase, with 279 units in three buildings.

Security Properties is gearing up to build more apartments in the Spring District of Bellevue.

The Seattle-based firm already is constructing five buildings with 309 units in the first phase, and now is starting to plan a second phase with 279 units in three buildings.

Zoning on the sites allows structures up to 125 and 150 feet but Michael Nanney, director of multifamily development for Security Properties, said the firm prefers to do shorter wood-frame buildings over a concrete podium because that keeps the cost — and rents — down.

The tallest building is a light gauge steel structure.

Security Properties is seeking permits for the second phase now and Nanney said he hopes construction can begin in about a year. 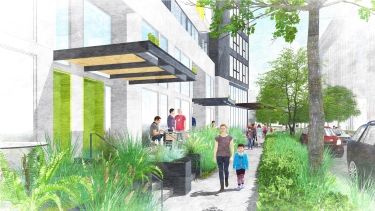 The simple, clean design is intended to reflect the area’s industrial past. [enlarge]

Work on the first apartments began in June and crews now are building a shared parking garage.

Nanney said each building is being permitted separately, and construction will begin as permits are issued. Nanney said he expects to get permits for about one building each month for the next few months.

Mithun is designing the second phase and Walsh Construction Co. is doing preconstruction services. Walsh is the general contractor for the first phase, and GGLO is the architect.

Nanney said Security Properties brought in a different architect for the second phase because it wants variety in design.

Nanney said the best designs reflect their neighborhood. The Spring District has an industrial history so the second phase design will be simple and clean, with concrete and metal siding.

Wright Runstad & Co. and Shorenstein Properties are developing what they estimate will be a $2.3 billion neighborhood on the 36-acre Spring District site. It will be built around a future Sound Transit light rail station and could have up to 5.3 million square feet of offices, retail, housing and parks.

Early next year, construction will begin on a three-story building with a brewery or brewpub on the ground floor and creative office space above. That building is expected to be done next summer, a few months before the first apartments open.

Wright Runstad announced in June that the Spring District will be the future home of Global Innovation Exchange, an international technology institute that is a partnership between University of Washington and Tsinghua University in China.