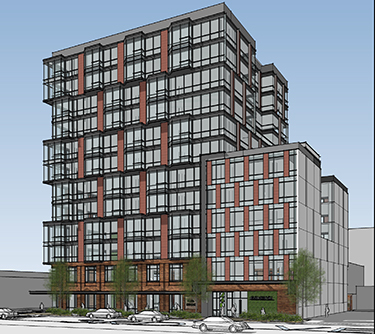 Image by GWest Architecture [enlarge]
The 12-story building will be at 2401 Third Ave.

A developer new to Seattle says it wants to construct a building in Belltown that will feel like living in a French villa.

This would be the first U.S. project for Taiwan-based Chainqui Development.

The Belltown project is called Urban Green Villa, with a 12-story mid-rise at 2401 Third Ave. A two-story U.S. Bank building would be demolished.

The proposal calls for 116 condo units, 5,000 square feet of street-level retail and 112 parking stall on four levels below grade.

(Editor's note: A previous version of this story had the wrong name for the development consultant.)

A Seattle design review board will hold its first meeting on the project at 7 p.m. today in Seattle City Hall, Room L280.

An entity related to Chainqui Development acquired the 13,000-square-foot site at the northwest corner of Third and Battery Street for $5.2 million in 2014.

The firm envisions the units will appeal to a multicultural group of tech-savvy people in their 20s and early 30s who want to live in an urban environment and invest in a condo.

The architects proposed several design alternatives, but the preferred option is for a building with an open green area to break up the mass and bring in light and air.

Residents would enter on Third Avenue, and retail would wrap around Third and Battery.

Green walls are planned both at the street and upper levels. Terrace and pocket gardens would be on the upper levels.

New landscaping on Third and Battery would help soften the street and sidewalk. Special paving patterns are proposed for the residential entry and street corners.

The west side of the site faces an alley, and the north side faces a parking lot.

One challenge the developer faces is that the Battery Street tunnel runs beneath the site. The tunnel will be abandoned after the Alaskan Way Viaduct is dismantled, likely after the condo project is completed. Plans for the tunnel could affect the design and landscaping, particularly on the western side.

Martin Selig Real Estate is constructing a three-story office and retail building across the street, at 2400 Third Ave. The project will house Antioch University.