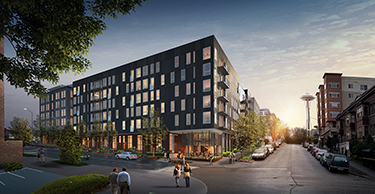 An entity related to Greystar paid $14 million for land in Uptown where it will build an apartment complex called Elan Uptown Flats.

The site is at 301 Queen Anne Ave. N and 300 First Ave. W., and the sellers are Seattle Elks Lodge #92 and Washington State Labor Council, AFL-CIO. The price equates to about $389 per square foot for four parcels.

The complex will have 182 apartments, 14 live/work units and 142 underground parking spaces.

Work is set to begin in December, according to William Justen of The Justen Co., the owner's representative. Units could open in the third quarter of 2017.

Weber Thompson is the architect and Compass General Construction is the general contractor.

The complex will have an “urban porch” at the entry. Weber Thompson's website describes it as a raised deck with an overhang for weather protection. There will be a steel and wood slated screen, and a fire pit on the porch.