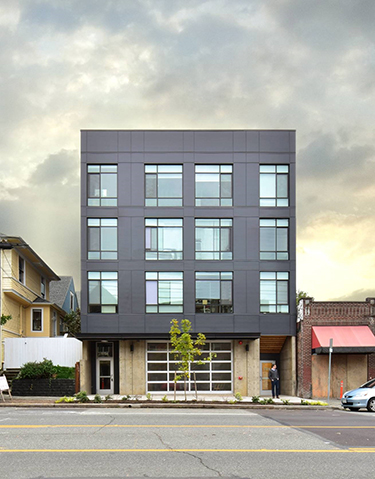 A Seattle micro-apartment complex developed by a limited liability company of Scott Shapiro is one of five finalists for the Jack Kemp Excellence in Affordable and Workforce Housing Award from Urban Land Institute.

(Editor's note: This story has been changed to clarify that the project is a finalist, not the winner. Information on unit sizes and rents has also been corrected.)

The building is fully leased.

Units have large windows, kitchenettes, zero-VOC paints and finishes, and energy-saving appliances and fixtures. Residents share a rooftop deck, and there is bike storage.

Scott Shapiro is a local developer and investor. Among his projects are several micro-apartment buildings and a revamp of the old Harvard Exit Theater. He also worked with Liz Dunn of Dunn & Hobbes to develop Melrose Market.