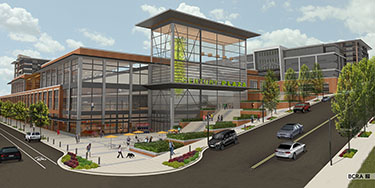 A Chinese firm is working on a $135 million mixed-use project near the University of Washington Tacoma campus.

The city of Tacoma signed a development agreement in August with an entity related to Wuhan Boshengshiji Real Estate Development for a 6.4-acre site bounded by South 21st and 23rd streets, and Jefferson and Tacoma avenues.

The sale price for the land is $3.5 million.

The project is expected to be built in two phases, with the first beginning in August 2016, said Martha Anderson, assistant director of Tacoma's Community and Economic Development Department.

BCRA and Absher Construction Co. are working on the project.

Xunkun Luo is CEO of Wuhan Boshengshiji Real Estate Development. In its proposal to the city, the company said it has developed more than 7.5 million square feet.

The developer has 120 days after the agreement was signed in August to evaluate the site and decide whether to move forward. That deadline will come in December, but Anderson said the developer has an option to extend the deadline for another 30 days.

Before the deal can close, the developer must show detailed plans and proof of financing. The agreement says about 30 percent of the project will be financed with funds raised through the federal EB-5 program.

Wuhan Boshengshiji isn't the only Chinese firm showing interest in Tacoma. Yareton Investment and Management, a local subsidiary of Shanghai Mintong Real Estate Co., is planning $150 million hotel and housing project next to the Greater Tacoma Convention and Trade Center. Construction on the 300-room hotel is expected to begin late next year. The second phase of about 200 housing units could start in 2018.

Ankrom Moisan Architects is designing that project, and Absher Construction is also working on the project.