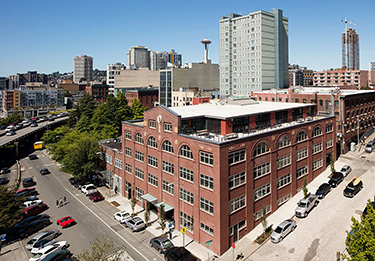 Urban Renaissance Group's acquisition of Touchstone was named the Deal of the Year by the Washington NAIOP chapter at its annual Night of the Stars awards event last week.

Touchstone garnered two other awards: Developer of the Year and Hospitality Development of the Year for Hilton Garden Inn, which is part of the firm's Hill7 complex in the Denny Triangle.

Holland won the Multifamily Development of the Year for Premiere on Pine, the 40-story apartment complex it built at Ninth and Pine — and sold for more than $240 million earlier this year.

The best Renovation or Redevelopment of the Year was Union Stables at 2200 Western Ave. Allegra Properties Lease Crutcher Lewis lead the team that renovated the 1909 building that used to house the horses used for pulling the city's streetcars and fire engines. The renovated building (shown here) is Lease Crutcher Lewis' new headquarters.

Dunn & Hobbes' Chophouse Row on Capitol Hill was named the best Mixed-use Development of the Year. The seven-story building has an “open market” at street level, including along an alley and courtyard, with six retail tenants. Above are four floors of office space and three penthouse apartments.

The most innovative project was 47+7, an apartment complex in the University District. The project used a now patented panelized construction method invented by Sustainable Living Innovations, a division of CollinsWoerman. The exterior has a steel “exoskeleton” frame with a concrete slab on the ground floor. Floors two through six are made of 136 floor and wall panels complete with plumbing, electrical and finishes that were built off site and taken to the site for final assembly.

The IT automation company called Chef has a new headquarters at 619 Western Ave. in Pioneer Square and it won the award for best commercial interior.

Wally Costello was added to the NAIOP Washington Hall of Fame at the event. At Quadrant Corp. Costello was involved in the development and planning of more than five million square feet of office, high-tech and industrial buildings as well as numerous business parks throughout the region. Costello has served on the NAIOP board and as its president.