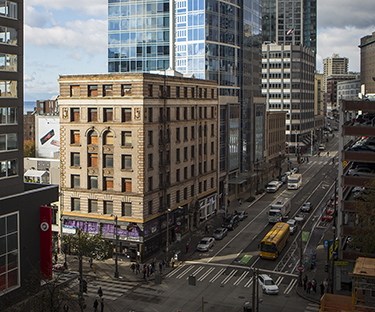 Lake Union Partners said it has purchased the 111-year-old Eitel Building at 1501 Second Ave. for $5.35 million and plans to turn it into a hotel.

Renovation of the seven-story, 45,000-square-foot historic building could begin next spring or summer. Lake Union Partners said in a press release the hotel is expected to open in early 2018.

The building will have a ground-floor restaurant and bar. Columbia Hospitality will operate the hotel.

Weinstein A+U and Root Culture Lab are designing the renovation. Root Culture Lab is a Seattle creative agency that says it focuses on brand strategy, environmental design and events. Coughlin Porter Lundeen is the structural and civil engineer.

With the exception of ground floor retail, the building has been vacant since the 1970s, according to the press release.

Several developers have attempted to purchase the building over the years.

Lake Union Partners is no stranger to complex renovation projects. It is finishing work on The Standard — a 125-year-old building at First Avenue and Spring Street — and turn it into creative office space.