Redhook opening a brewpub in Pike Motorworks next fall 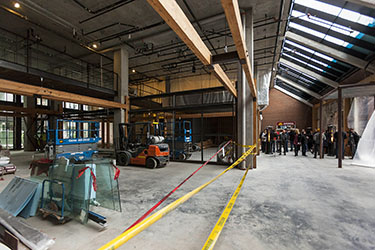 Photo by Erin Hatch/Weber Thompson [enlarge]
Some residents will enter their apartments by using a catwalk above the brewery. 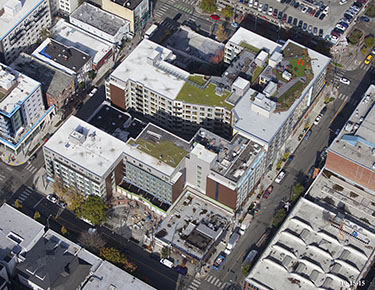 Photo from Exxel Pacific [enlarge]
New and existing buildings mix on the block, which is bounded by Pike, Pine, Harvard and Boylston.

Redhook will open a brewpub next fall in Pike Motorworks, a mixed-use complex that is under construction at 714 E. Pike St. on Capitol Hill.

The brewery will sit behind an old curved facade on Pike Street that developer Wolff Co. preserved as part of the two-building, 323,750-square-foot complex. It's a tight fit: The full-block site already has four buildings on it.

Wolff opened the north building in Pike Motorworks — with 137 apartments — about a month ago, and will open the south building with 106 apartments in early February.

The curved brick facade was part of a building that previously housed a BMW dealership.

Redhook's 10-barrel brewery will make beer for the pub and for sale elsewhere in the city. It will open in time for Redhook's 35th anniversary.

Pike Motorworks was designed by Weber Thompson and is being built by Exxel Pacific.

Jeff Reibman, senior project manager at Weber Thompson, said Pike Motorworks has pedestrian walkways that connect in the middle of the site to a courtyard, where entries to the housing are located. He said the project covers most of the block and can be accessed from four sides, though it only “controls” one of the block's four corners.

The first residential level of the south building will have a clubroom and catwalk overlooking the Redhook space. Reibman said the idea is to integrate the commercial and residential spaces, as they are in other areas on Capitol Hill.

Three levels of underground parking have stalls for 193 cars. There also are 90 bike parking stalls.

About 12 percent of the housing is leased. Apartments range from studios to two-bedroom units.

Exxel Pacific, the general contractor, is finishing apartments in the south building, and working on the old facade and courtyard.