Avvo starts moving into 8th+Olive after $11M renovation is completed

By JOURNAL STAFF
Photos courtesy of LMN Architects [enlarge]
The building has a new glass entry and canopy. 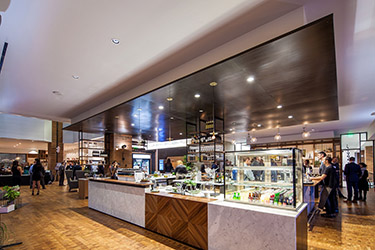 [enlarge]
The lobby was expanded to create a 7,000-square-foot community hall with retail and a collaboration area.

Talon Private Capital has completed an $11 million makeover of 8th+Olive, an office building constructed in 1981 that was formerly named 720 Olive.

Talon said in a press release that 8th+Olive is one of several Seattle-area buildings it recently purchased and modernized. They are in locations the firm said attract young workers, and include 1800 Ninth in Seattle and Bellefield Office Park in Bellevue.

8th+Olive's anchor tenant Avvo, an online legal marketplace with over 300 employees, has leased 110,000 square feet on floors 11-17 and is moving in this month.

Retail tenants are Mr. West, which serves food, wine, beer and coffee; and Juicy Cafe, which serves made-from-scratch food and juices. Mr. West is operated by the owners of Madrona's Bottlehouse wine bar.

8th+Olive is 96 percent leased. Occupancy was 84 percent when Talon bought it.

Talon said 92,000 square feet on floors 1-7 will be available for lease in January 2017, and the tenant can have its sign on the building. Community Health Plan is vacating the space in 2016.

The building has a new glass entry and canopy. Windows are set in dark anodized aluminum frames.

Talon said the lobby was expanded to create a 7,000-square-foot community hall with parquet-style flooring throughout the retail spaces and a collaboration area.

The building also has conference space, showers and lockers, and more bike storage. A fitness center is expected to open soon.

All seven elevator cabs were replaced. The upper elevator lobbies and restrooms are being retrofitted as new tenants move in.

Foushee & Associates and DP Incorporated are the general contractors.

LMN Architects and Graham Baba Architects designed the community hall and retail. Burgess Design was in charge of improvements on the upper floors.

Root|Culture Lab Design did interior design for Mr. West. It is the design firm of Mr. West's owners Soni and Henri Schock.

Talon said 8th+Olive is between the central business district and South Lake Union. The 45-story 8th & Howell hotel is across the street, and a number of apartment and office towers are under construction nearby.

Bill Pollard, Talon co-founder and managing principal, said the change is more than cosmetic. He said 8th+Olive “brings vitality to the neighborhood and community to our street level from morning to night.”