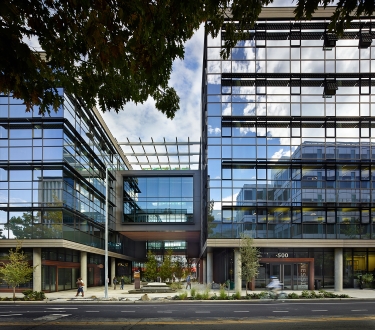 Union Investment paid approximately $757 per square foot. The property opened in September 2014 and Amazon leases all the office space.

Retail in the complex is filling up. Ethan Stowell and Josh Henderson will open restaurants there next year, and a Seattle company called Frost will have a doughnut shop.

The DJC reported earlier this month that Vulcan was offering to sell Amazon Phase VI and the office portion of Alley24, which is home to Skanska and NBBJ.

Amazon Phase VI is part of a 1 million-square-foot expansion of Amazon' South Lake Union campus that Vulcan developed. Two other buildings — Phases VII and VIII — were finished this summer as part of the expansion and are not for sale.

Amazon VI is Union Investment's fourth purchase in Seattle since 2003, including Millennium Tower, Fifth & Pine and Fremont Lake Union Center. The last two were sold in 2012. It has 10 office properties in the U.S., which is the firm's third biggest market behind Germany and France.