Historic Pioneer Building getting in on hot new trend: co-working 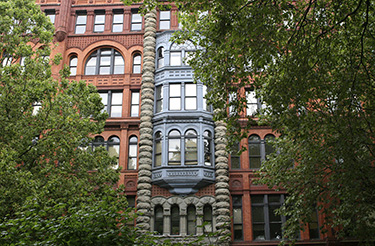 A Chicago-based company called Level Office that provides co-working spaces and private offices said it has purchased the Pioneer Building at 606 First Ave. in Pioneer Square and plans to renovate it.

Level Office President Kelsey Balk said the company wants to begin work on the 72,000-square-foot, six-story historic building as soon as it gets city permits. Level Office typically looks for buildings where it can maintain the historic character while modernizing the interiors.

Level Office has not hired an architect or contractor, and did not disclose what it paid for the structure. An entity related to Sun Capital Corp. of Vancouver, B.C., bought the building in January 2014 for $12.3 million.

Balk said Level Office has been looking at Seattle properties for more than a year. The company targets cities with a strong tech base and where population and jobs are growing faster than the U.S. average. Seattle checks all those boxes, and also has a lot of entrepreneurial types who need space where they can work on new ventures.

Balk says Level Office stands out from its competitors because it offers a variety of spaces.

“We are not just co-working,” Balk said. “We are a cross between co-working space — where people mix and mingle and bounce ideas off each other — and... that private office when (people) need to put their head down and work.”

Another difference, Balk said, is lower prices. Coworking memberships at Level Office cost $199 a month, and private offices, which can range from 60 to more than 300 square feet, start at $349 a month.

A quick online check of competitors shows a variety of prices and services. Impact Hub Seattle charges $345 a month for a full-time desk, and WeWork charges $550 a month for an office.

Level Office's buildings have amenities like lounges, conference rooms, an iPad-controlled coffee maker and beer taps. Many are bike-friendly, with storage facilities and showers. Balk expects the Seattle location will have all these amenities.

To accommodate tech startups, the offices have 100-megabit-per-second fiber Internet, WiFi throughout and voice over IP calling.

Level Office was founded by Bill Bennett, a professor of real estate entrepreneurship at Northwestern University near Chicago. He has a company that buys properties near the university and turns them into student housing. Bennett wanted an office for that company, but since it was new and growing he didn't want to commit to a long lease. When he couldn't find anything that suited his needs, he created Level Office in 2013 to help entrepreneurs find collaborative workspaces.

Bennett recently wrote an editorial for Forbes arguing that every office will be a co-working space in five years. Co-working spaces, he said, represent an opportunity to disrupt the traditional real estate market by “eliminating the walls separating co-workers and other companies.”

“The conventional office delivery model is diseased,” Bennett wrote, “as businesses are more dynamic than ever before and they often can't wait six months to a year to build out space, and they absolutely want well designed space that isn't soul-crushing.”

Level Office has multiple locations in Chicago and Houston, and property in Dallas and Charlotte. Balk said Level Office waits to see how the first location does before opening a second one in a city.

The Pioneer Building was constructed in 1892, and housed mining companies during the Klondike Gold Rush. It also had the city's first speakeasy during the prohibition era. In 1977 the Pioneer Building as well as the nearby iron pergola and totem pole were designated national historic landmarks.