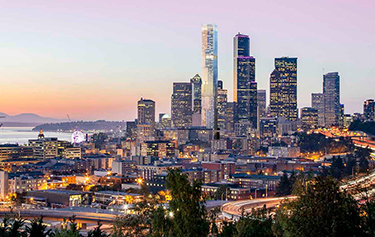 Courtesy LMN Architects [enlarge]
The latest plans call for a 90- to 100-story structure.

Crescent Heights Inspirational Living has released new images and details about the residential, office and hotel tower it wants to build at 701 Fourth Ave.

Documents filed with the city of Seattle in advance of next month's design review meeting show Crescent Heights is considering a range of sizes for the building, which is called 4/C.

The project also includes 12 levels of parking above and below ground.

The height range may be due to an issue with the Federal Aviation Administration. The FAA put out a study last year saying that at 1,117 feet above ground level, the proposed tower would exceed obstruction standards and have an adverse effect on navigable airspace or air navigation facilities.

Design review documents show models of the tower at both the developer's preferred height — 1,029 feet — and FAA's maximum height — 959 feet — which is a little shorter than the 76-story, 967-foot Columbia Center nearby.

Crescent Heights, which has headquarters in Miami and San Francisco, has until March 8 to respond to the FAA study, the DJC reported last month.

Many of these spaces would be available to residents as well as hotel guests and officer workers, with the goal of “blurring boundaries” between the different uses, the documents say.

A podium on the north side of the site will have outdoor space on the roof.