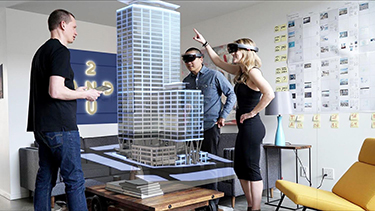 In June, Skanska will open what it says is the world's first holographic real estate leasing center for 2+U, a high-rise office project it is planning at Second and University in downtown Seattle.

Skanska and Studio 216 created a multi-user, holographic tour that will let people go around and through 2+U. It uses Microsoft's new visualization technology, the HoloLens mixed reality headset.

A number of people can use it at the same time, but their experiences will be different, said Lisa Picard, executive vice president for Skanska USA Commercial Development.

She said 3-D technology is already used to design projects, so it makes sense to give potential tenants an immersive experience by using HoloLens.

“Whether this helps us attract or gain tech tenants I am not really sure, but as a tool for helping people understand complex urban projects this is a step in the right direction,” Picard said.

Here is the 2+U project team: Pickard Chilton Architects of New Haven, Connecticut, is the design architect, and Kendall/Heaton Associates of Houston is the project architect. Swift Co. is the landscape architect, and Graham Baba Architects is designing the retail.

Picard said she expects more people will use HoloLens technology in real estate. The 2+U designers have used HoloLens to make changes in the project such as relocating an opening or switching materials, she said.

Skanska bought three HoloLens headsets for about $3,000 each.

The leasing center location has not been announced.

The 2+U site is adjacent to Seattle Art Museum and Benaroya Hall. Construction has not started but Skanska said 2+U is set to open in early 2019. Picard said none of the office space has been leased.

The office tower will have about 690,000 square feet of leasable space, and sit above an “urban village” at street level. Retail shops, bars and restaurants, and public spaces will activate the village.

HoloLens will allow potential tenants to hear the sounds of people and activity in the urban village spaces, Picard said.

Seattle-based Studio 216 is a digital production agency. It is one of seven agencies worldwide chosen to participate in Microsoft's HoloLens Agency Readiness Program, which is intended to solve business problems.

Boaz Ashkenazy, founding partner of Studio 216, said in a statement, “The HoloLens headset will transport users into a immersive first-person perspective — as if they were walking through the project — while allowing them to stay visually and emotionally connected to the representative in the leasing center.”